The organ of Temple Beth Israel in Portland, Oregon 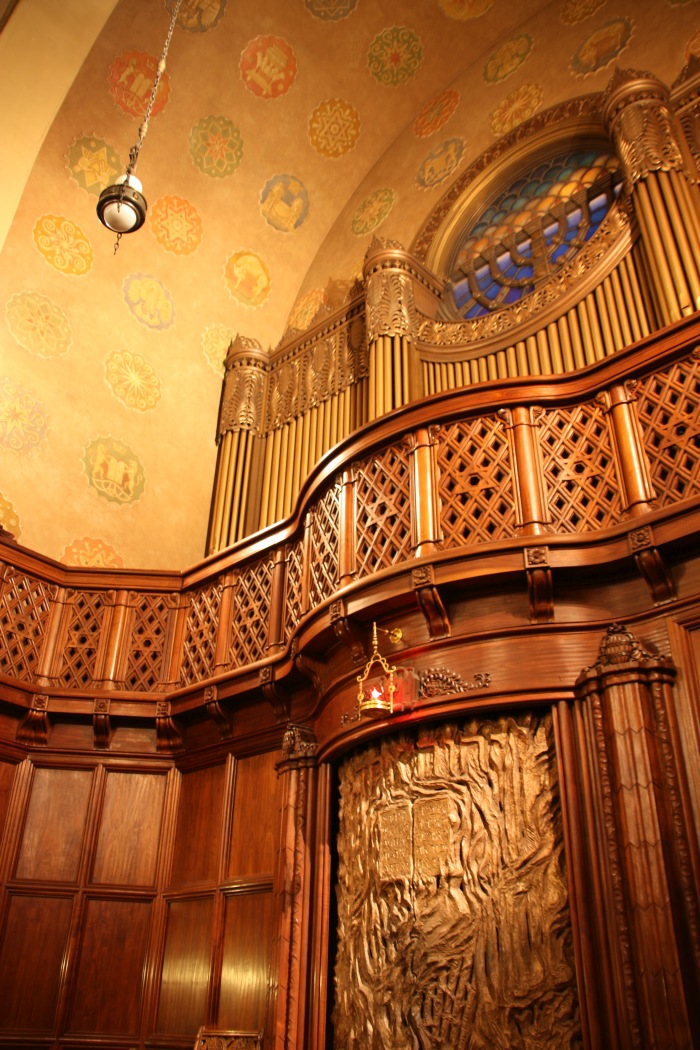 The congregation was formed in 1858 and first met in Burke's Hall on First Street. In 1861 they built their first edifice which was the first synagogue on the Northern Pacific coast. It was enlarged four years later, but was soon outgrown. A new temple was consecrated in 1889 and housed a Geo. Kilgen organ that burned with the temple in 1923. The present Byzantine-style temple of brick and sandstone was consecrated in April 1928. The Reuter organ was contracted on December 28, 1926. It was scheduled for delivery in September 1927, but was probably not installed until 1928. The cost of the organ was $25,000.00

The Reuter Organ Company is an American organ-building firm founded in 1917 by Adolph C. Reuter (1880-1971). Two years later the firm moved to Lawrence, Kansas. The company still operates today, and it has built more than 2240 organs during its hundred year history. Until the post World War years, the organs were tonally conservative, voiced on moderate wind pressure, following the general trends in the American organ building.

Reuter opus 227 is built along the principles of an orchestral organ in the late American Romantic style, relying on octave stops, especially 8'. Plenty of flue and reed foundation stops of all the possible tonal colors are included. Four different beating/celeste stops are also available. High pitched stops and mutations are rare and voiced to enhance the upper harmonics of the foundation stops, rather than adding brilliance. This allows for extremely smooth crescendos and decrescendos and a truly orchestral sound. The whole organ has only one single mixture of 3 narrow ranks. A special feature of the organ is its extensive use of string stops. Two typical percussion stops, Harp (metal plates) and Chimes (tubular bells), are also included.

The entire organ is under expression. It has four manuals and a pedal. A sixth division is a floating string division whose 5 speaking stops are independently available on each manual. The total number of pipes is 3094 in 45 ranks, forming 80 speaking stops.

The compass of manuals is 61 keys, but there is a sixth octave available through supercouplers (most stops have 73 pipes). The pedal compass is 32 keys.

With the generosity of Schnitzer family, Portland philanthropists, and temple members, the organ was restored by Bond Organ Builders in 2004, when the original Quintadena on Swell was replaced by Principal 4.

The organ is especially suitable for symphonic transcriptions, Romantic repertoire, and also for popular music of the early 20th century.

The reverb time is ca. 2 seconds, although it tends to be longer on low frequencies.

All ranks of all the divisions were recorded with and without tremulants where available for the most convincing tremulant behavior. However, loading the authentic tremmed ranks consumes large amount of RAM. It is possible to select to use the artificial tremulant instead to save RAM (the switch is located on the mixer tab).

Polyphony of 10000 voices recommended for the full suround (4500 pipes minimum).

Polyphony of 4000 simultaneous pipes recommended for use of the wet sample set.

The sample set is offered in the Surround variant (6 channels). In addition to the usual 4-channel surround, there are two more alternative front channels. In total, there are 4 front audio channels and 2 rear channels. The two pairs of the front ranks feature two different recording positions: direct (near to the pipes) and diffuse (distant from the instrument). These two pairs of the front ranks can either be mixed together freely to achieve any listening position between the two extremes, or used separately - depending on the preferences of the user. A dedicated "mixing desk" is available in Hauptwerk to mix the sound to the desired level.

ODF 1.03 - pistons in Pedal Matrix do not reset upon General Cancel. Good for Hauptwerk 6 and above!