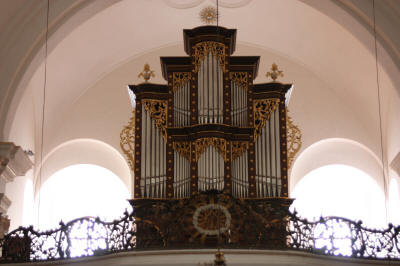 The instrument was newly built in 2007 for the church of our Lady in Adergas (Velesovo, Slovenia). The place belongs to the important pilgrim churches of the area. Former monastery was transformed into a spiritual centre, where groups or individuals may find refuge and spend days in silence and meditation, and enjoy the surrounding beauty of nature and giant mountains.

The organbuilder Tomaš Močnik lives in the town Cerklje nearby, and hence his Opus 14 in the Velesovo church is a kind of his "showroom" instrument. It was built in a very traditional manner, inspired by the Thuringian baroque organs, particularly by the work of Zacharias Hildebrandt. The Hauptwerk is situated in the centre of the main case, the Oberwerk occupies its upper part. The pedal pipes are located behind the windchest of the Hautpwerk. The tracker is purely mechanical, perfectly going, allowing good touch control.

The pipes are voiced extraordinary mild, even tender, and thus the resulting sound is not excessively pungent or penetrating. In spite of lower wind pressure, the pipes speak with ease and well defined attack. The gravity of the sound is achieved thanks to the 16' fundament of the Hauptwerk, supported further by the 32' fundament of the Pedal. The organ offers wide range of foundation voices: principals, open and stopped flutes, conical and chimney flutes, strings and reeds. The mutations are represented by mixtures, wide and narrow quints, thirds and Sesquialtera. Alltogether, the are 38 sounding stops. Accessory stops include separate channel tremulants for each division including the Pedal, couplers and a Zimberlstern (Glöcklein).

The sample set works in Hauptwerk 4.2 and higher versions (incl. Hauptwerk 5, 6 or 7, or any higher). The sample set is unencrypted, offered in plain wave format. No dongle update necessary. Hauptwerk advanced version recommended for the multi-channel use.

The original compass of the manuals is 56 keys. The pedal compass is 30 tones.

The samples are offered in 24bit/48kHz quality, multiple releases (3 levels). Plain wave formant (no encryption). Hauptwerk v.4 and higher supported. The reverberation time is up to 3 seconds for the ambiental versions. The sample set is presented in 2 different versions:

ODF 1.42 for the Surround and Dry variant - Visual misalignment of the right jamb buttons corrected.

version 1.4 published in February 2022. New screen layouts, including 4K resolution, new mixer added with the usual volume sliders, pipe coupling and detuning functions. Download from the user area. Minor voicing corrections here and there. Attention: I have heard from two users, that the previously saved combinations did not work after upgrade! Remember, that your old combinations may be lost forever by the upgrade.