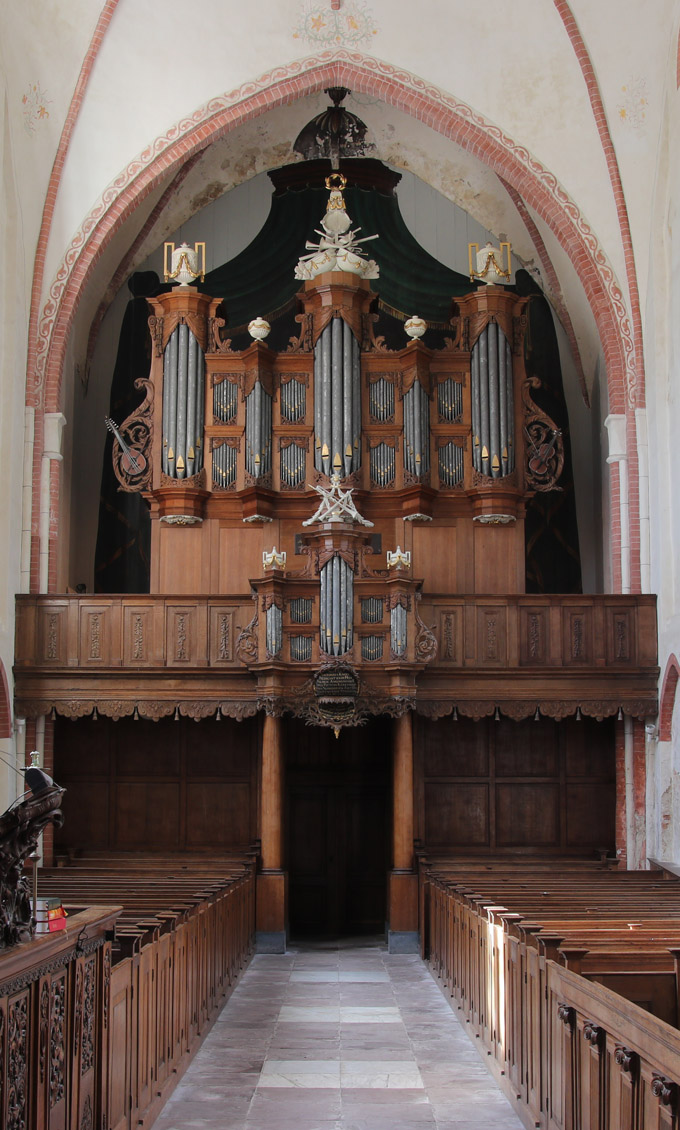 The Dorpskerk of Noordbroek is a brick building in the Gothic style from the first half of 14th century. Arp Schnitger delivered an organ with two manuals and a pedal in 1695 or 1696. A portion of the pipes from the previous instrument were included in his new instrument. The pedal was placed behind the main organ case.

Albertus Antoni Hinsz made extensive repairs in 1752. Then, in 1768 he provided new windchests for the manual divisions with a chromatic bass octave. He added the Quintadena 16, Vox humana 8 and Dulciaan 8. He also expanded the organ case and changed the keyboards of the instrument to accommodate the added pipes and notes.

In 1809, Heinrich Hermann Freytag expanded the organ case further by adding pedal towers on both sides of the organ case and changing the pedal stop list. He provided new pedal chests and new bellows. At this same time, the organ was given new carvings by Mattheus Walles.

In 1855-1856, Petrus van Oeckelen changed some stops in the Rugpositief and changed the Quintadena into a Burdon 16. He also replaced the shallots and reeds of the Dulciaan 8.

The restorations of 1955 returned the shape of the instrument to the 1809 state (Freytag). Cor Edskes was responsible for the work. The restoration work on the organ case was completed in 1974. The organ was given a Werckmeister temperament. Some minor improvements and maintanance was done by Winold van der Putten in the following years. In 2001, he repaired the bellows. Major maintanance was delivered by Mense Ruiter in 2014-2015.

The organ is composed of 24 stops of north German flavor, six of them reed stops. The special character of the organ is enhanced by the enchanting acoustics of the church. Numerous CDs have been recorded on this instrument and it is certainly one of the most famous organs of the Groningen "organ garden".

Special thanks to Mr. Peter Westerbrink.

All ranks were recorded with the Tremulant for the most convincing tremulant behavior. The ranks are marked "tremmed" in the rank description. Switching between recorded tremulants and artificial Hauptwerk tremulant is possible via mixer tab.

Polyphony of 4500 voices recommended for the full suround (2000 pipes minimum).

The sample set is offered in the Surround variant (8 channels). There are front-direct (semi-dry) channels, featuring the sound of the organ immediately in front of the organ case. The diffuse and the distant perspectives captured the sound in the church, further from the organ. The rear perspectives is designed for the rear speakers of the audio setup (where available). The perspectives can be mixed together freely to achieve any virtual listening position, or used separately - depending on the prefererences of the user. A dedicated "mixing desk" is available in Hauptwerk to mix the sound to the desired level.

The specification of the instrument, including the pipe dating details (PDF).