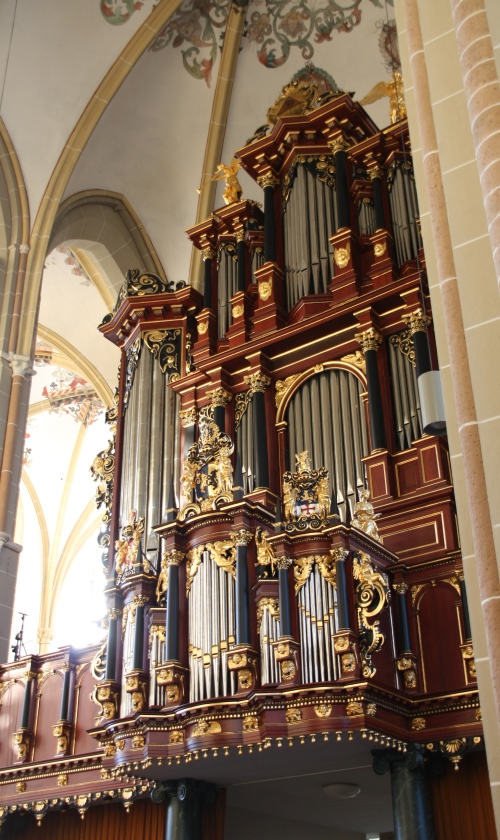 The church of St. Walburga (Walburgiskerk) is a large gothic cathedral. The reverb time is enormous, ca. 8 seconds long. We spotted even up to 9 seconds on some tones. The church houses three pipe organs. The most important of them is the historical instrument of Hans Henrich Bader (died ca. 1680). The organ was constructed between 1637-1643 and it was placed on the northern side of the church at that time. First, Bader was commissioned to add a Rugwerk to an existing older organ, later he added a new Hoofdwerk and a Pedal. The independent Pedal was a distinctive and innovative feature of the Westphalian organbuilding tradition Bader represented, since Dutch organs of the first half of 17th century lacked the Pedal division.

Later, in 1813-1815, the organ was substantially rebuilt, enlarged and  moved to the organ loft by J. W. Timpe. He added the third manual - the Bovenwerk. In 1906, the organ was moved again by G. Spit and J. C. Sanders to the western wall of the church. Also, the reeds were renewed at that time. The organ was damaged by fire in 1948.

A comprehensive restoration of the organ took place between 1993 and 1996 by Orgelmakerij Reil to the state of 1815 with some optimizations. The Bader concept is still clearly present in the Hoofdwerk, Rugwerk and the Pedal. New baroque-type reeds were supplied. The Bovenwerk was brought back to the shape of Timpe.

The wind is supplied by 5 wedge bellows, four of which date back to 1643. The organ is tuned in 1/6 comma meantone.

The organ belongs to the most notable organs of Netherlands and it is the finest surviving example of a Bader organ.

Special thanks to the Bader organ association for their warm welcome and assistance during our recording sessions.

Further reading: Some fine details and memories about the last restoration on the web page of John Boersma.

There are two variants of the sample set: the surround (6-channel) and the semi-dry.

The samples are offered in 48kHz/24bit resolution. The multiple releases have three levels: short, mid and long. Hauptwerk v.7 and higher required. The surround variant of the sample set is encrypted, dongle protected. Hauptwerk Advanced version is strongly recommended, the Lite version is not suitable to run the Surround variant of the sample set (memory limitations, audio channels limitations). There is no use of the sample set possible in any other software. The semi-dry variant is distributed in a plain-wave format (no encryption). Therefore, the Semi-Dry variant can be used in Hauptwerk 4.2 and higher.

The reverb time is ca. 8 seconds.

Polyphony of 7000 voices recommended for the full suround (3500 pipes minimum).

The sample set is offered in a semi-dry variant (sometimes referred to as a "moist" sample set). The mics were located near the organ case, capturing thus a high portion of the direct pipe sound as originating from the organ case. However, the recording is not entirely dry since the microphone placement necessarily resulted in capturing  a small portion of the reverberation of the church as well. The level of the reverb is low. The release tails can be cut in the Hauptwerk software to obtain reasonably dry audio.

The sample set is offered in a surround variant (6 channels). In addition to the usual 4-channel surround, there are two more alternative front channels. In total, there are 4 front audio channels and 2 rear channels. The two pairs of the front ranks feature two different recording positions: direct (near to the pipes) and diffuse (distant from the instrument). These two pairs of the front ranks can either be mixed together freely to achieve any listening position between the two extremes, or used separately - depending on the prefererences of the user. A dedicated "mixing desk" is available in Hauptwerk to mix the sound to the desired level.

Version 1.36 of the Surround set can be downloaded from within the "My Products" inside the user area. The sample set is good for Hauptwerk 7 (or higher).

Version 1.35 of the Semi-Dry set can be downloaded from within the "My Products" inside the user area. The sample set works in Hauptwerk 4.2 and higher.