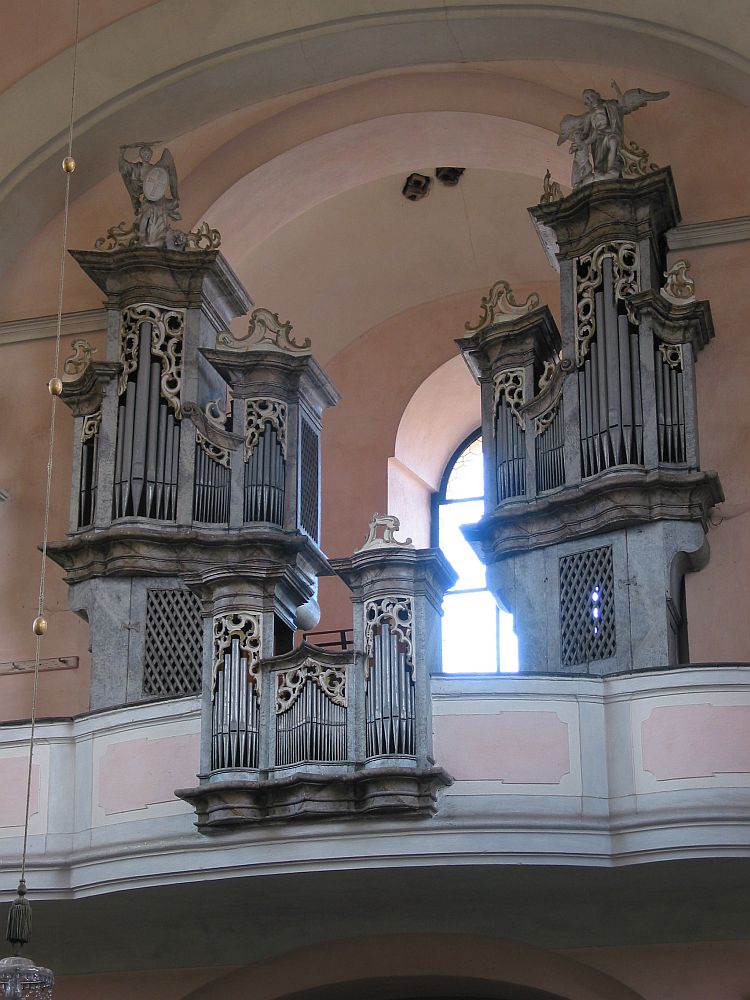 The instrument built in 1793 by Antonín Reis (1741-1815) in the church of Rabštejn nad Střelou bears all the typical characteristics of the Czech traditional organbuilding. The size of the instrument matches perfectly the size of the church: the principal chorus is built on a Principal 4', nevertheless it includes also a Quint 2 2/3' which contributes to the gravity of the Hauptwerk plenum and underlines the contrast with the Rückpositiv built on a Principal 2'. According to the view of prominent experts, this is one of very few Czech historical organs where the voicing of the Principals was never altered by later restorations and it was conserved in the original form (cited from the materials of the diocesan organ-surveyor Marek Cihar). The last major repair of the instrument was done in 1878, more than a century ago.

Besides that, there is an open Flute 8' and a Salicional 8' of a baroque (not excessively stringy) timbre. The Hauptwerk is crowned by a 4 rank Mixture with a tierce rank included. The inclusion of a tierce rank is one of the most typical signs of the traditional Czech organbuilding. The Rabštejninstrument may be immediately recognized among others by somewhat bizarre timbre of its Mixture. The instrument did not undergo any recent restoration or rebuild, the maintenance of the instrument is not done often as the church is not in regular use. One may, therefore, only guess what the intended structure of the Mixture originally was. The low three octaves are easy to set, but the pitches in the top octave are puzzling. Our virtual restoration - based on the analysis of the recorded sound - uses this composition of the Mixture:

The Rückpositiv of the instrument presents the essence of the traditional Czech Chaire organ (compare it with the Peruc model, Hrubý Rohozec or larger Zlatá Koruna and the Prague baroque). It offers originally 4 stops, stopped flues 8' and 4' (called traditionally Copula's), Principal 2' andOctave 1' which breaks in the highest octave back to 2'. In the extended version of our model, I decided deliberately to create an optional aliquots Quint 1 1/3' and a Terz 1 3/5' of a principal timbre, and a Nasard 2 2/3' of a flute timbre, to allow for more pronounced solo use of the manual. The extended stopjamb is presented on a special tab, so that purists may not be disturbed by the added stops.

The Pedal of the original instrument is not independent. It offers two stops 16' and 8' of a very limited compass (18 tones) and it was intended to provide support to large chords, e.g. at the very end of the musical pieces. The semitones C#, D#, F#, G# are missing in the lowest octave, but the lowest F# and G# are provided in the upper octave in place of the f# and g#. So, the scale is: C, D, E, F, G, A, A#, B, c, c#, d, d#, e, f, F#, g, G#, a. The intention was to provide the fullest great octave possible, given the limitations of the baroque short octave. This situation is reproduced faithfully in the original version of the ODF. In the extended model, I enlarged the compass to the standard 27 tones, and added a 4' Choralbass for the solo performance of a chorale melody.

Rabštejn nas Střelou - regardless of its importance in the history - is today somewhat deserted location. It is one of those rare places where you feel you escaped the civilization and you are about to reach the extremities of the Earth. Perhaps thanks to this remoteness, the instrument is preserved in its ancient state. It does not even have an electric blower - in fact, there was never electricity available in the church itself (in our virtual model, we added optional artificial blower noise for those who like to hear it). On the other hand, this instrument is more than others threatened by the long-term lack of regular care and its slow decay seems inevitable. It is not an exaggeration to say that we were perhaps among the last people who found the instrument in a playable state. We are happy, and perhaps even proud, that we were allowed to capture its tonal characteristics for future digitally.

The virtual organ  presented here offers the original form of the instrument, reproducing the short octaves, the original layout and appearance of the drawstops, the limited stoplist and the pedal compass. Apart from the documentation of the present situation, this makes it possible to study the appropriate organ music in perfectly adequate conditions.

The extended version of the virtual organ offers several additions to broaden the variability and easier usability of the sample set. The manual aliquots and the pedal Choralbass 4' for a cantus firmus play were already mentioned. The manual compass was extended to a standard one and also the pedal was virtually complemented to allow for an independent performance. A lot of couplers were added to make the life of an organist more easy. For the same reason, generals were added allowing to store and recall quickly the chosen combinations of stops. The extended version of the instrument (18 speaking stops) offers everything an organist needs for everyday home practice while keeping the resulting size of the virtual organ compact even if loaded in the highest 24-bit quality and the surround option. And yet, the characteristic "ancient sound" timbre of pipes may be enjoyed, especially if combined with a historical temperament, such as meantone or well-tempered variants which should be used instead of the standard equal temperament.

The samples are offered in plain (user editable) wave format in 24bit/48kHz quality, multiple releases, occasional multiple attack samples are used. No encryption. The reverberation time is up to 4 seconds. The sample set is presented in 4 different versions:

The console of the sample set reproduces faithfully the layout and the appearance of the original stops. However, for the ease of use by modern players, a second extended stop jamb was added (which may be alternatively displayed on a second LCD panel) where the drawstops were distributed according to the divisions and and also the extended stops were inserted. Finally, a few generals were added to the bottom of the extended console screen.

Rabštejn cumulative update ODF 1.01, package 816 1.02, package 817 1.02 - the compass of the manual coupler in the extended version was enlarged to match the compass of the manuals. All versions of the sample set affected (wet, dry, surround). The Octav 8' of the pedal division, the first B has a problematic loop when you keep the key pressed for more than 6 seconds. Loop not optimal on 076-E in the Hauptwerk Flute 4 (extension). More suboptimal loops in Flute 4. Copula 8 – 072-C reverb too loud, 071-B suboptimal loops. The Mixture: the middle release on the rear channels sounds too loud on many notes (C36 is a great example).