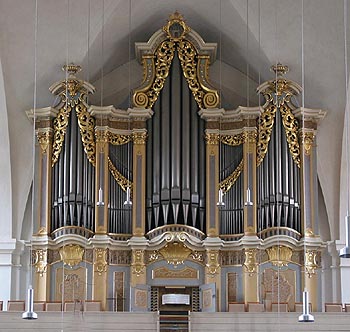 Freiberg in Saxony is an exceptional city as there are four (!) extant Silbermann's organs. The most famous instrument is the three manual organ in the cathedral. It is a work of Silbermann's youth: he built it when he was 27 years old. The sample set, which we present here, is a model of another Silbermann's opus. It is the organ in the Petrikirche (St. Peter’s church), a two manual organ with an unusually rich specification of 32 stops. Admittedly less famous than the Cathedral organ nearby, especially now after the reconstruction, the organ is a representation of the mature Silbermann’s craftsmanship of the late Baroque and an acoustic ideal for many interprets and organ lovers.

... whenever I travel to Saxony, it is the organ of the Petrikirche that I faithfully visit. It is here that I have found "the" organ. It is here that I understood, for the first time, the meaning of the famous "Gravität" which young Bach was already asking for in his report on the Mühlhausen organ, back in 1708. The Petrikirche organ, smaller than its illustrious neighbour (the cathedral organ with 45 stops), sounds nonetheless bigger, for it has a magnificent Principal 16', of unequalled nobility and depth. Another feature of this organ, and not the least, is that it is the only completely preserved witness to Silbermann's last manner.
(Jean Ferrard, from the CD booklet Orgue de la Petrikirche, Freiberg. Sic 004, 1998, p. 10)

We take the opportunity to highlight several moments in the history of this instrument. Silbermann’s fame was elevated after he finished the organ for Freiberg’s cathedral. There was no scarcity for new commissions and his works were highly appraised and paid. He settled in Freiberg and not surprisingly, the city councilors approached him to build the new organ for the reconstructed St. Peter’s Church. Silbermann himself expected this order as we can glean from the diary of his nephew, Johann Andreas. According to him, during the fire of St. Peter’s Church in 1728, Silbermann had three finished organs stored in a nearby house and he observed him kneeling in prayer. Silbermann reportedly promised to God that if the house and the organs within were saved, he would build a new organ for St. Peter’s Church free of charge.

In any case, the contract was signed on August 3rd 1734 with the planned finishing date in July 1736. We do not have the original version of the contract, only its copy from 1737. The price was set at 3250 tolars, released in 6 payments. It was the duty of Silbermann’s cousin, Johann George, to take over the construction in case Silbermann would die. The original disposition was for 31 voices, but Silbermann, as a gesture of gratitude to the city, added one register for free. Also, his collaborators were chosen among local tradesmen and they are named in the contract. Interestingly, at the same time, Silbermann worked on a three manual organ for the Frauenkirche in Dresden to be finished in November 1735. Due to the fact that construction in Frauenkirche was delayed and Silbermann was waiting with an already finished organ for installation, he was able to finish his Freiberg work nine months earlier. Hence both instruments were built mostly in parallel with the same wind chest, disposition, and pipe work of the „Hauptwerk“. This allows us to envision the acoustic performance of the Dresden organ, which was later frequently rebuilt before it was destroyed in 1945. Similarly, lost in time, the destroyed three manual organ in Zittau (1741) had an identical disposition of Hauptwerk. As to the outward appearance of the casework, built by Christian Polycarp Butzäus, it was almost identical with the also destroyed organ in Sophienkirche in Dresden.

The St. Peter’s Church organ was consecrated in celebration on October 31st, 1735. Interesting features are many 16‘ voices, „French“ register Vox Humana, a pedal coupler on the principle of  "Bass Ventil" (valve), conservative modified meantone temperament and general tuning using "Chortone" a1= 463 Hz instead of a usual "Kammertone", where a1= 412 Hz.

History of the reconstruction

None of Silbermann’s work remained unchanged and free from interventions later. In a better case it involved general maintenance, exchange of worn parts or the change in voicing. A worse scenario was a change in disposition of the instrument and of the whole acoustic imprint. Some changes affected also the organ in St. Peter’s church. A general maintenance was done in 1768 and 1792. The year 1855 brought the change to the equal temperament. The company Jehmlich undertook a substantial intervention in 1895 by:
- introduction of „normal“ tuning (a1 = 435 Hz)
- intonation (voicing) was redone
- tone C sharp added to all keyboards
- a shifting manual coupler was replaced by a hinged one with its own pull
- completion of Subbass 16“ register in pedal
- Pedal-Trompete 8´ moved to an auxiliary wind chest
- addition of a new manual (Hinterwerk) with period voices Violine 8´, Dolce 8´, Aeoline 8´, Flute harmonique 4´, and Salicet 4´ on a membrane wind chest, connected via a coupler to the Hauptwerk
In 1917, the organ was spared of the prospect pipes to be requisitioned for war purposes. The instrument was found heavily infested with a wood beetle in 1935 and the worst damaged parts were replaced (Jehmlich). A new bellows system was installed in 1940 enabling supply of different pressure for the Hauptwerk and Pedal (90 mm water column) and for the rest of the organ (80 mm water column). The added manual’s disposition was altered in more Baroque way (Dulzflöte instead of Aeoline, Gedackt 8´ instead of Dolce, Prästant 4´ instead of Violine 8´, Superoctav 2´ instead of Salicet 4´, added Scharf 2fach). Later in 1952, changes were made to increase the wind supply to the pipe work and the wind pressure was decreased to 75mm water column. At that time neo-Baroque organs were appearing. The end of the 50s brought upon a change: the added manual was removed in 1961 and the temperament changed to an unequal one. Horst Jehmlich performed a thorough survey of the instrument in 1975 and outlined historically accurate restoration of the instrument. Lack of finances led to only partial interventions until 1993, like reconstruction of the tracker mechanism, removal of C sharp (still, without returning to the original temperament), removal of the 1896 Subbass 16‘ in Pedal, relocation of Trompete 8‘ to its original place, reconstruction of the manual shift-lever coupler and renovation of the console and register pulls.
Since 2004, detailed planning for a general reconstruction respecting return to the original shape from 1735 was under way.

Once financial means were collected, the companies Jehmlich and Wegscheider were approached and they performed the restoration between October 2006 and July 15, 2007 – the day of new consecration.
Rough outline of the restoration includes:

In this way, the Silbermann organ was restored to its original beauty and sounds again in the Petrikirche.

Petrikirche (St. Peter’s church) in Freiberg. The history of the church and its musical history.

St. Peter’s church dates back to the 12th century. It was built as a three-nave Romanesque basilica on one of the highest elevations of the city, also a place that served as former execution grounds. The church was consecutively modified in the Gothic style due to frequent fires (1225, 1375, 1386, 1471, 1484). For a significant time, the church stood in the center of an affluent merchant district hence there was no scarcity of funds for construction. A large fire in 1728 left only the outside walls and the south tower standing. The church was then rebuilt in a Baroque style and the culmination of the efforts was the acquisition of a new Silbermann organ in 1735. Theodor Quentin substantially changed the interior of the church in 1895-96 who removed the empores and enlarged the site choirs deeper into the church nave, which became narrower. The last pronounced changes were in 1974-83. Walls joined the side empores and the spacious areas behind them serve the needs of the parish. A glass wall separates the sanctuary. Friedrich Presse designed the sculptures adorning the bright white interior. However, the aesthetically interesting reconstruction lacks from the acoustic viewpoint. The church’s attractions include a 236-foot (72 m) high Peter’s tower with bells from 1487 and 1570 as well as the two story apartment of the fire watchman who resided there until the beginning of the 20th century.

The Lutherans owned the church since 1537, long before a wide spread of reformation in Saxony. The musical life prospered there. Beside the accompaniment of liturgy, figurative music and solo performances flourished. The first organ appeared in the church in the second half of the 16th century. Gottfried Fritz upgraded the organ into a three manual instrument with pedal and many solo voices (Dulcianbass, Bauernflöte). Christoph Schreiber arranged for alterations in 1629 and in this period the organ was the biggest and main one in the town because the Cathedral instrument (originating in 15th century) nearby was in poor shape.

Angels playing flutes adorned the prospect of the organ. The Thirty Years' War led to a partial decline and the post of the organist was absent for financial reasons. Around that period for some time, the post was given to Andreas Hammerschmidt, the son of Czech emigrants and possibly one of the most played German composers in that era. The last reconstruction of this specific organ was done in 1678 and then another fire destroyed it on May 1st, 1728. But even before that, the musical life was transitioning towards the city cathedral, where Silbermann built an excellent organ in 1714. It was him who was entrusted to build a new instrument for the reconstructed St. Peter’s Church. It was supposed to be the most beautiful and outstanding organ in the city, however the spirit of the actual period and the intellectual development was unsupportive. The late Baroque period brought about a slow decline of solo organ performance. The St. Peter’s parish leaders were influenced by Pietism (Christian Friedrich Willisch, among them) and required only supportive musical accompaniment from the organ. Solo performance, figurative and instrumental music was restricted to the minimum.

The organist’s post was not well supported and with the death of the last organist in 1761 was abolished. All the more surprising is Silbermann’s approach to the challenge. Not only did the newly built organ fulfill the requirements reflecting the change of taste and musical sentiment, but also went above and beyond. Silbermann built an instrument, which is not only enabling the interpretation of the traditional Baroque repertoire, but at the same time is offering a new acoustic quality, which transcends the Baroque. The organ builder’s intent succeeded - even now, after 270 years, the reconstructed organ sounds in its original beauty during the liturgy, concerts and in frequent recordings.

Special thanks to Andreas Hain, the Kantor, for his incredibly warm and kind welcome during the recording.

The reverberation time is up to 4 seconds. There are multiple loops in the sample (normally 3 sometimes up to 5). Two tremulants (Tremulante, Schwebung) modelled at different rates. Dual channel tremulant model proprietary to Sonus Paradisi used for higher fidelity of the tremulant model.

The original compass of the manuals is 4 octaves without the lowest C# (this tone was added virtually in our model). The original pedal compass is 2 octaves without the lowest C# (also added virtually). In the virtual model, we extended the compass of the manuals to 4.5 octaves (up to f) and also the pedal compass was extended to 2.5 octaves (up to f). New in version 2.5: the extended compass works also with the Original Organ Temperament.

The sample set is presented in 2 different variants:

The restoration committee in July, 2007 have chosen the Neidhardt II temperament for the instrument, the temperament descibed by the author as "fuer die kleine Stadt" what is perfectly fitting for Freiberg. This is the temperament table (the cent deviation from the equal temperament):