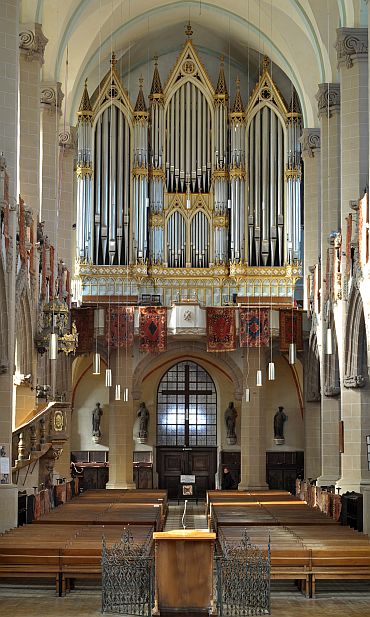 The instrument is the largest preserved organ by Carl August Buchholz (1796 - 1884), the prolific Berlin organbuilder. It consists of four manual console with 63 sounding stops.  The Black church (Biserica neagra, Schwarze Kirche) is a Lutheran church in the heart of the Transylvania (today Romania). Transylvania had German colonists since the 12th century, there is an uninterrupted German Lutheran tradition since the outset of Lutheranism in Europe. Brasov is the centre of this ecclesiastical body. The church is known for its unique collection of historical Turkish carpets which hang all over the walls and everywhere - and they also undoubtedly contribute to the acoustical condition of the Gothic building. The organ is the largest mechanical instrument of Romania. The importance of the instrument is underlined by frequent concerts: from spring to autumn, there are three organ concerts every week.

The type of the  instrument is sometimes called "in between the times". It has clear marks of the Romantic sound: domination of 8 feet stops, poly-choric design of divisions, fully developed choruses (flutes, strings, principals, reeds) in every division, strong dynamic contrasts between divisions. Yet, it is still rooted in the baroque organ design with its "Werkprinzip" and pyramidal structure (foundational stops, aliquotes, mixtures). The core of this organ is the Joachim Wagner organ from the Marienkirche in Berlin, organ which Buchholz repaired in 1829. The purely mechanical action operates the traditional slider chests, requiring a good amount of force to play the keyboards.

The organ is physically designed in three floors: the base is occupied by the pedal with the tallest pipes on the very sides of the organ case. The Oberwerk is seated in the floor above in the front, resulting in a direct and present sound. The Unterwerk is behind, enclosed, and it has the characteristics of a true echo division. The upper floor belongs to the Hauptmanual (front) and Rohrwerk (back, enclosed), allowing for somewhat distant, as if mystical, sound from the above. The colors of the stops blend together perfectly, delivering really smooth crescendo where no stop (not even the loudest ones) stands out of the dark and heavy tutti.

The organ was built in 1839 in the early Romantic style. It was preserved without major changes until present. There was a minor renovation in 1966 when several stops were changed:

The purpose of these changes is clear: to give somewhat brighter detail to the instrument, following the neo-baroque fashion.

During the latest restoration by Ferdinand Stemmer, all the changes were puristically undone to restore the primordial state, because the original pipes were mostly available. Hence, the insrument is now in the shape as it came out of the hands of Buchholz. It is definitely the best preserved Buchholz organ ever.

Special thanks to Mr. Steffen Schlandt, the titular organist of the Black church, for his warm welcome in Brasov, for precious information about the history of the instrument and for the fine photos of the instrument supplied for this web page.

The samples are offered in 48kHz/24bit resolution. The multiple releases have three levels: short, mid and long. Hauptwerk v.4.2 and higher required (incl. HW5). The sample set is open format, no encryption.

The sample set is offered in the Surround variant (6 channels). In addition to the usual 4-channel surround, there are two more alternative front channels. In total, there are 4 front audio channels and 2 rear channels. The two pairs of the front ranks feature two different recording positions: direct (near to the pipes) and diffuse (distant from the instrument). These two pairs of the front ranks can either be mixed together freely to achieve any listening position between the two extremes, or used separately - depending on the prefererences of the user. A dedicated "mixing desk" is available in Hauptwerk to mix the sound to the desired level. See the illustration.

A beta tester commented: The mixer setting 64 is the default listening position, making a good balance between the direct and diffuse sound. Settings below about 40 start to get too direct for my ear, but I like setting 64, and again 100, with the rear channels at 80. It is nice to be able to go just about anywhere in the building to place my ears.

Normally, the direct and the diffuse ranks would be both routed into the same audio output (usually called the "Main output" in Hauptwerk), while the rear ranks would normally be routed into the rear audio channel. Obviously, it is also possible to disable either the direct ranks or the diffuse ranks, achieveing a traditional 4 channel surround, depending on the preferences of the user.

The demo pieces presented on the demo tab show various settings of the mixing desk of the Brasov Surround Sample Set.

The reverb time is ca. 5 seconds.

• Evacuant (to get bellows empty)

• Calcanten Glocke (bell to the calcant, in Hauptwerk this is a blower switch, it shoudl remain on!)

Photos of the organ by Steffen Schlandt

Christoph Keller shows very well what can be done with the sample set:

For more performance of Christoph Keller, see his Youtube channel.

Version 1.2 is the latest version. No updates.