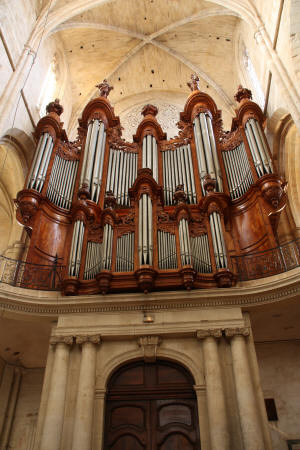 The town of Saint Maximin was the centre of early Christianity in Provence and, more broadly, in France. The monumental royal basilica was raised by Charles II d'Anjou to the honor and glory of Mary Magdalene. According to ancient and venerable tradition this lady, well known from the Gospels, came to Provence to preach the Good News, obeying the Jesus' command "Go forth and preach the Gospel to all nations...". After many fruitful years, she died and was buried where the basilica stands today - at the place where Saint Maximin, the first bishop of Aix-en-Provence raised an oratory. After the holy reliquiae of St. Mary Magdalene were found in 1279, the present basilica and the adjacent Dominican convent were constructed in 1295-1296. Her tomb became a place of pilgrimage, and the reliquary with the scull of St. Mary Magdalene can still be venerated in the crypt of the basilica today.

The basilica itself is said to be the tallest in Provence at 33 meters, and it houses many treasures and pieces of art that attest to its history. Among these is the the large and magnificent "double sixteen feet" organ built by friar Jean-Esprit Isnard and his nephew Joseph in 1772-1775. The organ is located in the western gallery above the main entrance. It is one of very few French historical organs that miraculously survived the French revolution. Legend says that when the revolutionaries came to the basilica to destroy its furniture including the organ, the organist of that time, Mr. Forcade, played the revolutionary song "Marseillaise" in front of the revolutionary authorities. It saved the organ from demolition. However, the Dominicans were expelled and the place lost its importance for some time due to the secularisation of the French republic. However, being "just another organ" in a small countryside village during the 19th century, it was fortunately saved from all the modernising tendencies of that time.

As the result, this organ remains one of the few large French instruments in which the original material made by Isnard is preserved in its entirety: 2960 pipes, except that the original wooden pipes (the bass octaves of the bourdons) are used for display only, since they were replaced with metal bourdon pipes during the last reconstruction.

Registration tips for the French baroque music by Patrique Larhant.

The Ist, IInd, and III.rd manuals may be upwards-coupled together by dragging the keyboard one over another.

A lot of intramanual couplers added.

Version 2.23 ODF. Mixtures Fine Tuning switch position is remembered after re-loading. This patch should be installed on top of the v 2.21 existing installation.

Version 2.21 downloadable from the user area 'My Products". It is a full installation (complete sample set to be reinstalled).