The smaller and the older brother of the main rear gallery organ (which is available as a sample set for Hauptwerk as well) is located in the Transept of the same St. Laurentis church in Rotterdam (Netherlands) and it is a top example of the European organbuilding of the mid twentieth century, in the years following the 2nd World War. 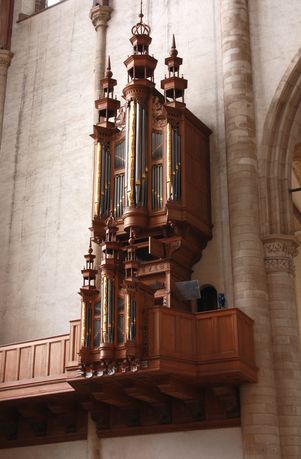 The bombing of Rotterdam on 14 May 1940 damaged the building as well as its organs. The church was restored after the war, and the new organs were created from scratch, built upon the historical legacy of the previous instruments. The Transeptorgel occupies the space on a balcony where a renaissance instrument was located in the distant past. A medium size instrument was chosen to accompany the services held temporarily in the Transept of the church, which was reconstructed first after the bombing. The historical organ case used comes from the St. Bartholomeus church in Schoonhoven, because it has striking similarity with the renaissance instrument known from 17th century paintings of St. Laurentis. Originally, the case belonged to a Henrick Niehoff organ (1539-1540), but that instrument was out of use for a long time. The Marcussen organbuilding company filled this case with a 3 manual instrument. The main organ case houses a Hoofdwerk and a Pedaal and a tiny Borstwerk underneath. A smaller Rugwerk case was added to the balustrade of the balcony. The lowest octave of the Spitsgedekt 16' is located in a small room behind the organ.

The organ has 31 speaking stops, divided into four divisions: Rugwerk, Hoofdwerk, Borstwerk and Pedaal. It is the last work of Sybrand Zachariassen, the leader of the Marcussen company at that time, and it is usually praised as his greatest work. The special feature of the instrument is the horizontal Regaal 16' sticking out of the organ case under the door enclosing the Borstwerk. The door can be opened or closed by a pedal, adding a "swell" effect to the Borstwerk.

The wet variant of the sample set is avaliable in plain wave format. Hauptwerk v.4.2 and higher is supported (incl. HW5)

The sample set is offered in three different variants: dry, wet, surround. Each of the variants is stand-alone.

Dry: samples are recorded with minimum reverberation close to the pipes. There is no reverberation present in the sample set. This variant is suitable for use in reverberant spaces, such as churches. It may also be used with a digital reverb added in postprocessing.

Wet: the "direct" approach. The samples are recorded from shorter distance of the instrument, using a stereo mic pair. A good sense of directness of the speech of pipes is achieved, nice to hear through headphones or a simple 2-channel stereo setup. The samples are proprietary to the wet variant, they are not used in the surround variant. Nevertheless, this variant may be considered a "lite" version compared to the surround variant, there is no blower or tracker noise included and the tremulant is disabled for the Borstwerk. (Tremulants on the Rugwerk are working normally using recorded tremulant waveforms).

The recording positions of the Wet variant and that of the Surround variant were different. The direct approach (used in the Wet sample set) and the diffuse approach (used in the Surround variant) differ in the distance of the microphones from the organ, the microphones for the diffuse were situated farther away. Therefore, if the Surround variant is used in a simple 2-channel environment, the result would still offer a different audio perspective of the Rotterdam Transept instrument: the result would be more diffused (more reverberant) sound than when the genuine Wet variant is used in the same way. As the result, the sample set in its entirety (dry, wet, surround) offers an unusual flexibility in varying the listener's position.

Polyphony of 2200 simultaneous pipes recommended for use of the wet sample set.

Polyphony of 4000 simultaneous pipes recommended for the surround variant.

The organ offers the usual couplers:

There are two additional foot levers:

The swell pedal operates the door closing/opening the Borstwerk division.