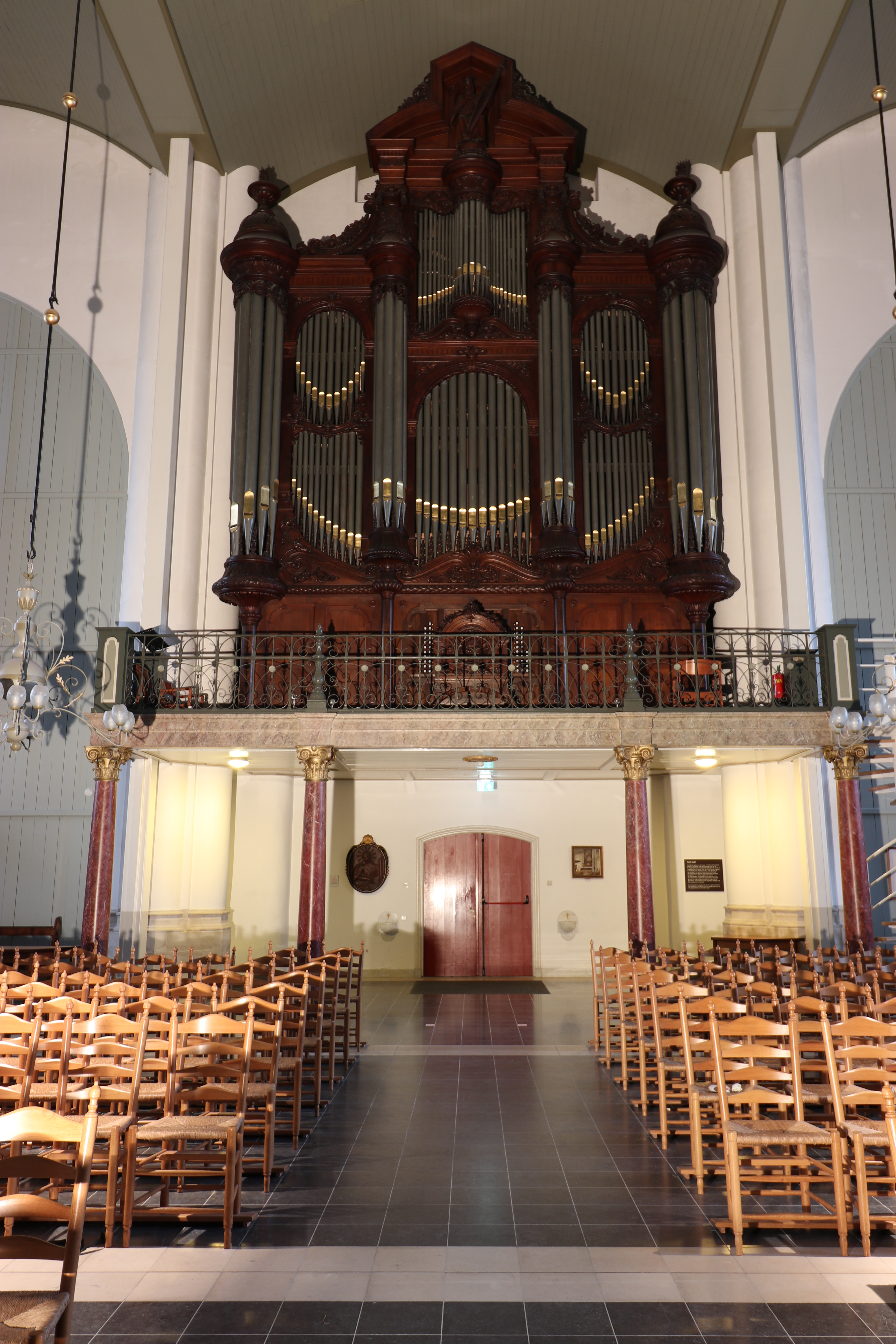 The church of St. Gertrude is a large Gothic structure from the second half of the 15th century. After the Reformation in Bergen op Zoom in 1580, the church was adapted for Protestant worship. In 1747 the church suffered much by war violence. After reconstruction, a new organ was built by Louis Del Haye from Antwerp in 1771. The organ served to the Protestant worship until recently, but on April 10th 1972, the Gertrudis church was once more destroyed by fire during restoration work and the Del Haye organ was completely lost.

The Ibach organ which is placed in the Gertrudis church nowadays was delivered in January 1864 for the church of the Virgin Mary at Heavenly Remembrance at the Grote Markt in Bergen op Zoom by the German organ builders Rudolf and Richard Ibach. On January 27, 1864, the instrument was inaugurated by the organists Friedrich Lux of Mainz and Alphonse Mailly from Brussels. It was a large organ, with 41 sounding registers, divided over three manuals and a pedal and it had a mechanical tracker action. The Brussels architect Emanuel A. J. Cels was the designer of the monumental organ case, for which the wood carving in mahogany and oak was performed by the Turnhout's studio of Hendrik Peeters-Divoort. In 1915, the organ was transformed into a smaller pneumatic organ of 25 registers. Its two manuals and the pedal retained much of the old pipe work. The swell disappeared and the stop list was changed. Further modifications were done in the successive decades. Then, in 1988, the organ was transferred to the Gertrudis church, the restoration of which was just completed and handed over to the Catholic church.

However, after moving to Gertrudis church, it became apparent that maintenance of the organ's pneumatic parts and the electric wind supply, more than three quarters of a century old, became increasingly expensive. In addition, after two major changes in the twentieth century, there was little or nothing left of the original character of the organ. Intensive use of the organ in liturgy and concert demanded for a comprehensive restoration. As early as 1997, organ consultant Jan Jongepier noted that it would be of international importance to revert the Ibach organ to its original form. In 2001, Jongepier made a restoration plan and the Verschueren Orgelbouw Heythuysen BV was commissioned to carry out the restoration. The total restoration costs were over € 900,000.

After the concert on Sunday, January 11, 2009, the instrument was dismantled and transported to Verschueren organ shop in Heythuysen. Only the organ case has remained in Bergen op Zoom and has been restored on site. The 'Friends of the Ibach Organ' collected the necessary funds since November 2003 to make the restoration possible. A fine coincidence was noted by the president Koert Damveld: while the organ was the opus no. 111 of Ibach, it happened that it was the opus no. 1.111 of its restorer.

The organ was completed again and solemnly inaugurated on Thursday, March 17, 2011. It has 42 stops spread over 4 divisions (3 manuals and a pedal). The disposition is almost identical to the original Ibach stoplist (Fagott 16' added to the Great and Cromorne changed to Euphone on Récit). The organ is representative for the rise of the Roman Catholic church in Netherlands in the second half of the nineteenth century, especially in the region of the Brabant land. The orientation of the  „progressive“ organbuilders was gradually changing to the symphonic style. 16 and 8 feet stops started to dominate, making the sound not only darker (what was admired), but it allowed for wide dynamic gradation in fine steps, the soft pianissimo side still enhanced by use of a swell box (3rd manual). New stops were invented and employed, e.g. free reeds (Euphone), overblowing pipes (Flaut Travers), double labial pipes (Jubal), outward tapering shape (Viola). The organ offers unusually wide variety of solo stops, while retaining a robust and monumental plenum of the first manual which can be contrasted or multiplied by the lesser plenum of the second manual. The organ is composed of 2.417 pipes in total.

The samples are offered in 48kHz/24bit resolution. The multiple releases have three levels: short, mid and long. Hauptwerk v. 4. 2 and higher supported. The sample set is offered in plain wave format. Hauptwerk Advanced version is strongly recommended for use, the Basic version is not suitable to run the Surround variant of the sample set (memory limitations, audio channels limitations).

The sample set is offered in three variants: SemiDry, Surround and Wet-Distant.

SemiDry - the microphones were close to the organ case, almost attached to the front pipes, migrating from division to division.  This variant contains the highest portion of the "dry" pipe sound, the reverb level is minimal, its length is still apparent, though.

Surround -The microphones were arranged in the typical Sonus Paradisi setup. Two microphones captured the sound relatively near to the organ (but not as close as the SemiDry mics), other two microphones captured the sound at greater distance from the organ (diffuse sound) and two microphones heading away from the organ captured the response of the church (rear). In total, there are 4 front audio channels and 2 rear channels. The two front pairs can either be mixed together freely to achieve any listening position between the two extremes, favoring direct or diffuse organ sound, or used separately - depending on the prefererences of the user. A dedicated "mixing desk" is available in Hauptwerk to mix the sound to the desired level.

Wet-Distant - This particuar St. Gertrudis church offers an unusual long reverb characterized by a high envelopment (very slow decay) and relatively slow reflections. We liked this very much and therefore we employed an additional microphone pair to capture the sound of the organ at great distance. This recording contains very high portion of the diffuse reverberated sound. We did not intend to make this public and it served for a comparison only when creating the surround variant. However, we believe that there may be organists who may love the feeling of envelopment as much as we do, and therefore we decided to release this variant publicly as well. It is not suitable for practicing music, since the response of the tracker is not as immediate as one would need, but it may be liked for free improvisations while the spirit moves with the reverb to the endless space around.

The church has a very long reverb. The reverb time is ca. 7 seconds.

The organ has no tremulant.

Polyphony of 6500 voices recommended for the full suround (4000 pipes minimum).

Polyphony of 3500 simultaneous pipes recommended for use of the wet or semi-dry sample set.

Pedal violone 16 C#37 has some instability that "sticks out" on held notes.

It could be nice to have the pedal compass up to the f.