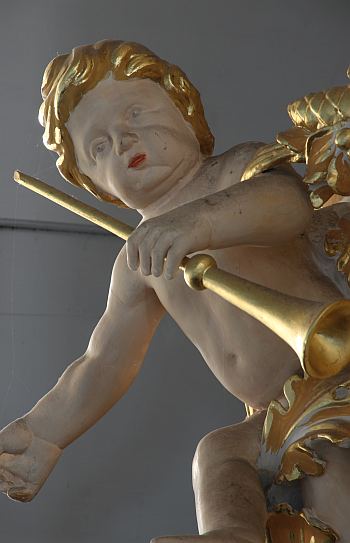 The New Church in Arnstadt was where the young Johann Sebastian Bach has got his first job as an organist at the age of 18. He served there from 1703 to 1707. After Johann Friedrich Wender erected the new organ in 1703, it was Johann Sebastian Bach who inspected and inaugurated it. The Weimar consistory had sent the young, talented musician to Arnstadt, and the church committee, thrilled by his skills, immediately offered him the position as the organist. However, Bach was not completely happy there and he often had conflicts with other musicians and students of the local school. The situation became even worse when he disappeared for several months in 1705 after being granted leave for only 4 weeks. During this time he traveled to Lübeck to hear and study with Dietrich Buxtehude. In 1707 he left Arnstadt for Mühlhausen, and a year later he started to work for the Duke of Weimar.

The Wender organ may seem surprisingly limited for the great Bach and this set of pieces. Nevertheless, that is the reason why I include it in my Sonus Paradisi organ library. This way, everyone can have the chance to practice Bach pieces on the organ he had at his disposal in Arnstadt. The instrument is a two-manual organ with 21 stops. All divisions share a single case. The great organ offers no less than 6 stops of 8', a low quint (without a corresponding 16' stop!), Octave 4, Mixture, and a Cymbel. The positiv (Brustwerk) offers 7 stops in total, none of them a reed. The pedal division is limited to 4 stops, including a solo reed Cornet 2'. Interestingly, this pedal cornet is the only independent 2' stop of the entire instrument. While the organ offers few aliquotes, there is an outstanding range of color in the various foundation stops of wide, normal and narrow scaling.

The organ has not survived until the present intact. Changed considerably several times in history, only about 25% of the original pipes exist today, although the facade of the organ case is original. The original console of the Wender organ was moved to the local museum in 1864 and it was not reused during the latest restoration. Also, the windchests, action, and all the other inner workings were made in 2000 when Orgelbau Otto Hoffmann provided a detailed reconstruction of the Wender organ. Hoffmann's work was performed according to the original agreement of the church with Wender dated 1699, although there is no certainty that Wender built the organ exactly as described in this agreement. The missing stops were reconstructed after contemporary models; Posaune and Trumpet after Lahm (Herbst, 1728), Cornet after Abbenrode (Contius, 1708), Subbass after Horsmar (Wender, 1694).

Colin Pykett: The 'Bach Organ' at Arnstadt  (thanks to the user "larason2" for the link)

The sample set is offered in the Surround variant (8 channels). There are direct channels, featuring the sound of the organ immediately in front of the organ case. The diffuse perspective captured the sound in the church, further from the organ. The distant channels were captured even further from the organ. The rear perspectives is designed for the rear speakers of the audio setup. The perspectives can be mixed together freely to achieve any virtual listening position, or used separately - depending on the prefererences of the user. A dedicated "mixing desk" is available in Hauptwerk to mix the sound to the desired level.