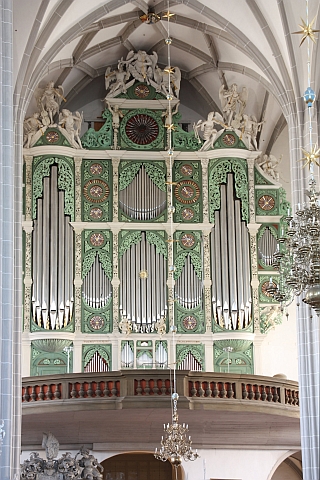 The church of St. Peter and Paul in Görlitz was founded in the 13th century and it attained its present shape in 1497. The central nave is flanked by four aisles, forming a huge and highly reverberant space. In 1691 it was reconstructed after a fire, and consequently it was given a new organ, finished in 1703 by Eugenio Casparini (1623-1706) and his son.

The organ had 57 stops on 3 manuals and it was among the largest instruments in Silesia. The organ case was designed by the architect Johann Conrad Büchau. The special feature of this facade is the implementation of 17 golden suns, which also sounded as a pedal cornet-mixtur of 12 ranks. These suns have given name to the instrument: Sun-organ = Sonnenorgel. The pedal mixture "Sonnenmixtur" had also a trumpet rank included. These reed pipes were spread all over the case held in the hands of the angels!

Although the organ was very famous, Johann Sebastian Bach complained about the tough tracker touch. When playing it, he said that this organ required a the strength of a horse to press the keys.

Besides the organ case, only the Cypress-wood pipes of Onda maris have survived from the Casparini organ until the present. In 1894, the company Schlag and Sons rebuilt the instrument. Later in 1928, the company Sauer installed an electo-pneumatic organ into the historical case. The Sauer organ had 89 stops on 4 manuals and pedal.

The interior of the church was restored between 1980-1992 and there were plans to build a new organ into the historical case. The specification of the new instrument could not follow Casparini´s organ (since none of his instruments exists unaltered). Furthermore, the Sauer organ was not suitable for restoration, being only partially preserved after World War II. The expert committee decided to build an instrument inspired by the Casparini´s baroque concept, but enlarged by a swell manual allowing to also perform later organ music. The work was entrusted to the Swiss company Mathis Orgelbau.

In 1997, the first part of the instrument was inaugurated: the 3 manuals (HW, OW, BW), and the pedal. The construction of the swell division was postponed, and was completed in 2006. The clever voicing of the instrument and its large, rich specification makes the organ universally suitable for almost every kind of organ music. The organ has 87 speaking stops, the usual couplers, a number of playing aids and toy stops.

One additional special feature of the instrument must be mentioned: its toy stops. The instrument has five highly entertaining stops: Kuckuck, Tamburo, Vogel-gesang, Cymbelstern and Nachtigall. Oh, this last one is particularly amusing.

We agreed with the government of the Görlitz church, that after making the digital snapshot of the instrument, there should still be something unique and special left that the visitor should hear only and exclusively when visiting the church personally. For this reason, the Sonnenmixtur - the top-most specialty of this instrument - remains silent in the Hauptwerk virtual model.

Special thanks to Mr. Reinhard Seeliger, the organist of the Sonnenorgel, for his exceptional kindness and tireless support during our recording sessions.

Sonnenmixtur (12 rank pedal Cornet-Mixtur with a Trumpet rank) - not modelled in Hauptwerk, this special stop is reserved exclusively for the visitors of the real instrument.

The sample set is sold in several editions: free, small, medium and full. The editions differ in the number of speaking ranks (pipes). See the comparison chart. All the editions require Hauptwerk software, version 5 or above!

Many ranks were recorded with and without tremulants for the most convincing tremulant behavior. However, loading tremmed ranks consumes large amount of RAM. It is possible to select to use the artificial tremulant instead to save RAM.

RAM consumption: 6-channel surround, the front-direct ranks loaded with truncated releases (simulated dry, long decay 250ms). The front-diffuse and the rear ranks loaded with normal full releases. This is the recommended option for computers with 64 GB of RAM or less.

Polyphony of 9000 voices recommended for the full suround (3500 pipes minimum).

Polyphony of 4000 simultaneous pipes recommended for use of the wet sample set (2500 minimum).

The virtual organ requires about 100 GB of the HDD space.

RAM consumption: 6-channel surround, the front-direct ranks loaded with truncated releases (simulated dry, long decay 250ms). The front-diffuse and the rear ranks loaded with normal full releases. This is the recommended option for computers with 64 GB of RAM or less. 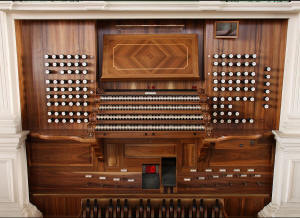 this is the general console view. It serves to define the keyboard MIDI inputs for all the divisions. The only active part of this view are the manuals and the pedal. The crescendo roller and the swell pedals can be set too. Specifying the MIDI inputs is done by right-clicking on the desired manual or pedal. All the other screen components are image-only. 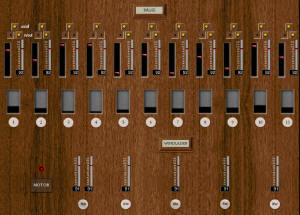 this is the view of the wind ways of the instrument, the base for the Hauptwerk wind model. In the upper part, there are 11 hand pumped wedge bellows, the red indicator shows how full/empty the bellow is, the gauge on the side shows the inner pressure inside the bellows. The switches above each bellow show the operation of the bellows. The upper one served to enable or disable the bellows completely (you can run only several bellows if you wish - attention, the organ can become short of air quickly). The lower two buttons show whether the bellows is inflating (left button) or deflating (right button).

In the lower corner of this view, there are gauges to measure the pressure each of the virtual windchest. The button on the left side is the blower on/off switch. 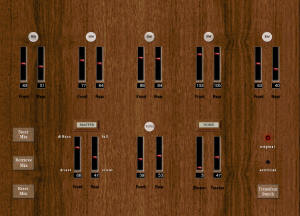 front - rear volume adjustment can be made here, for each   division separately. The mixer settings can be stored and retrieved later. The selection of the real or artificial tremulant happens   on this tab as well - see the switch in the right bottom corner. 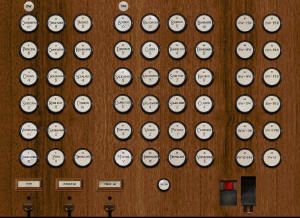 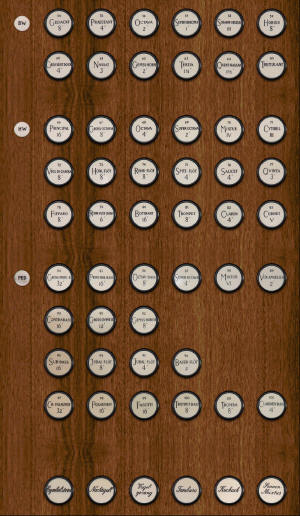 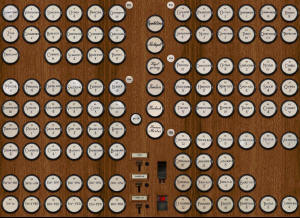 for a single touch screen, this is the stop jamb to be used. All the stops of the organ can be found there. This view allows for landscape and wide landscape orientantion, according to the size of the touchscreen used. Please note, that the foot levers found on the original organ were not reproduced, since they only duplicate hand drawstops which are available. All features of the organ can be controlled by the drawstops, hence the foot levers were omitted. You may, however, attach your MIDI foot pistons to any drawstop to imitate the behavior of the original organ. The attaching of the physical piston to a button on screen is done by right-clicking on the button. You may attach more than one MIDI physical switch to any of the drawstops on the screen. 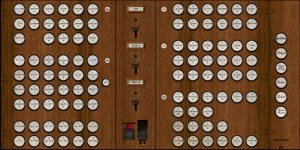 Note to the right click: The Single jamb, the Split Jambs and the Simple jamb, all allow for right-click to attach a specific MIDI hardware button to any of the software switch. This is done so that several different MIDI hardware buttons can operate one single software switch, so that the user can operate one stop or one and the same coupler with more than one hardware pistons. 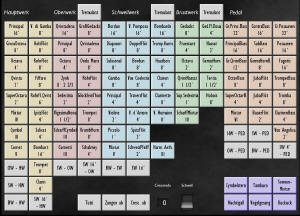 simplified version of a single jamb to allow for more readable version of the stop names on small LCD touch screens. 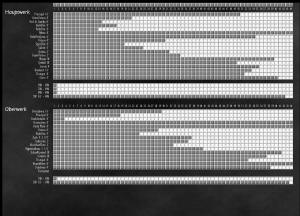 For each crescendo state (1-64), the state of any stop can be set in the three last screens of the ODF layout. Each coupler can be disengaged from the crescendo temporarily using the corresponding "Auslöser der Coppl. aus Crescendo" button.