A clavichord is a chordophone instrument. This means that its sound is produced by vibration of the strings hit by metal blades called "tangents" which are operated by a key.  The longer the string is, the lower tone it gives. One end of the string is hard attached to an resonator (soundboard). The other end is attached to the opposite edge of the instrument case. The tangent is located under the string somewhere in between its two ends. When you press the key, the tangent strikes the key and sticks to it making itself one of the oscilation nodes (nut).  The tangent sticks to the string as long as the key is held. When you release the key, the tangent leaves the string and its oscilations therefore stop - the tone mutes. There are two basic types of a clavichord. Unfretted type: each tone has its own string. Fretted type: a single string is there for two (or three) neighbouring keys (limiting the polyphony). Usually, the strings are available in pairs to give stronger sound. As the tangent strikes the string in the node producing only light oscilations, it cannot give loud sound.

In its long history starting in the middle ages, clavichords were usually ment as home practicing instruments. Today, its role was taken over by a pianoforte. However, the early music enthusiasts caused certain revival of this forgotten musical instrument.

The Clavichord featured here is from a private collection. It was built in 2006 after the J. J. Donat (1700), conserved in Leipzig Museum. It is a fretted type. The builder of the Klavichord is Jiri Kopecky.

For modelling the instrument in Hauptwerk, several precautions have to be made.

1. Clavichord is extremely quiet instrument. When performing music, the performer himself hardly hears any sound! Therefore, you have to turn the volume output of your  equipment to a low value to get the right volume!

2. Clavichord is a touch sensitive instrument. If you hit the key strongly, louder tone is heard than if you press it gently. Therefore, it is essential that you have a velocity sensitive MIDI keyboard.

3. Clavichord allows for aftertouch (so called "bebung" effect). As the tangent hits the corresponding string and sticks to it, you can then apply some vibrato or some other interesting effects. This was not modelled in our Hauptwerk virtual instrument!

4. It can be argued that it is not possible to make fully realistic model of Clavichord in Hauptwerk or using any other software sampler. We agree. This is just a non perfect model which provides its users with some basic features of the instrument because we believe that even in this way its sound is attractive and can give new experience and pleasure to the users who perhaps never came and never would came in touch with a real clavichord.

Clavichord is a touch sensitive instrument. Each key was sampled at 3 different dynamic levels (piano, mezzoforte, forte). The rest of the dynamic spectrum was inerpolated more or less linearly (the blue line on the graph below). The graph shows how the MIDI velocity relates to dynamics. Nevertheless, because of the limitation to 3 dynamic levels, the result is very much quanticised and although the interpolation helps a lot, the crossovers are  clearly audible. This is the obvious and deliberate limitation of our clavichord model. 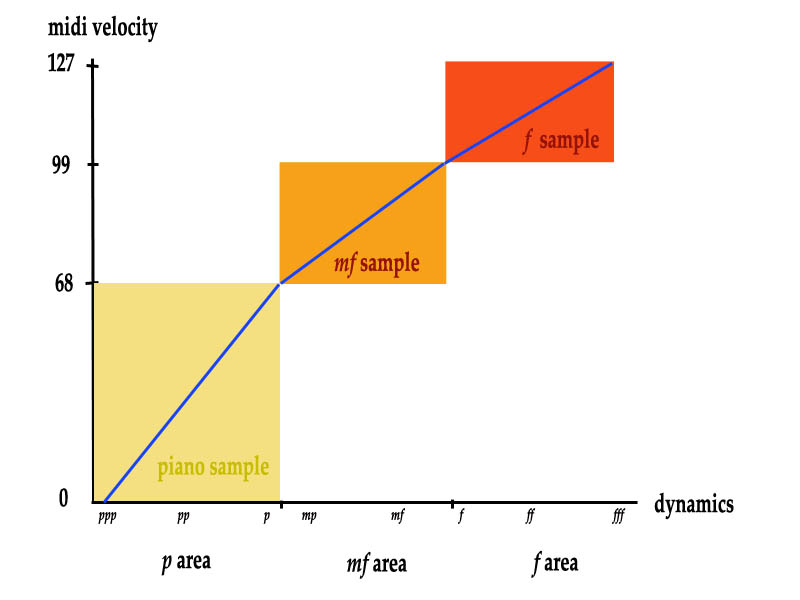 If you strike a key, not only the corresponding string starts to sound, but also sounboard response and sympathetic resonance of other strings is sounding. This gives a "reverberation" effect. However, the resonance is impulse-like, so that it is loudest at the moment of the key hit and then rapidly decays. Therefore, if you play "staccato", the resonance is large. When you keep the key for longer time, the resonance decays first and then only the string (tone) decay is heard. As the result, there is no resonance at the moment of the key release if this happens after long time.

To put it simply, one can say that the effect behaves according to the following formula: the longer you keep the key, the less resonance you get at the moment of key release. This is the feature where multiple releases are essential for a good model. Therefore, each dynamic level has 4 releases which are applied according to the time elapsed from the moment of pressing the key. As the result, a total of 15 samples are employed to emulate one single tone. The graph shows how the release tiles are applied to a piano attack sample (the same applies also for both remaining levels). 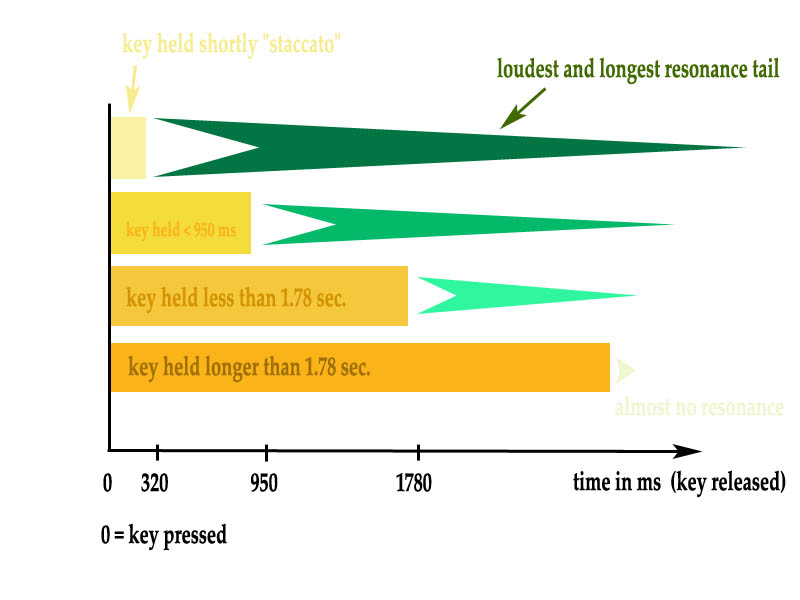 Clavichord model has one stop which is always on.