The Organ of Trinity Episcopal Cathedral in Portland, Oregon 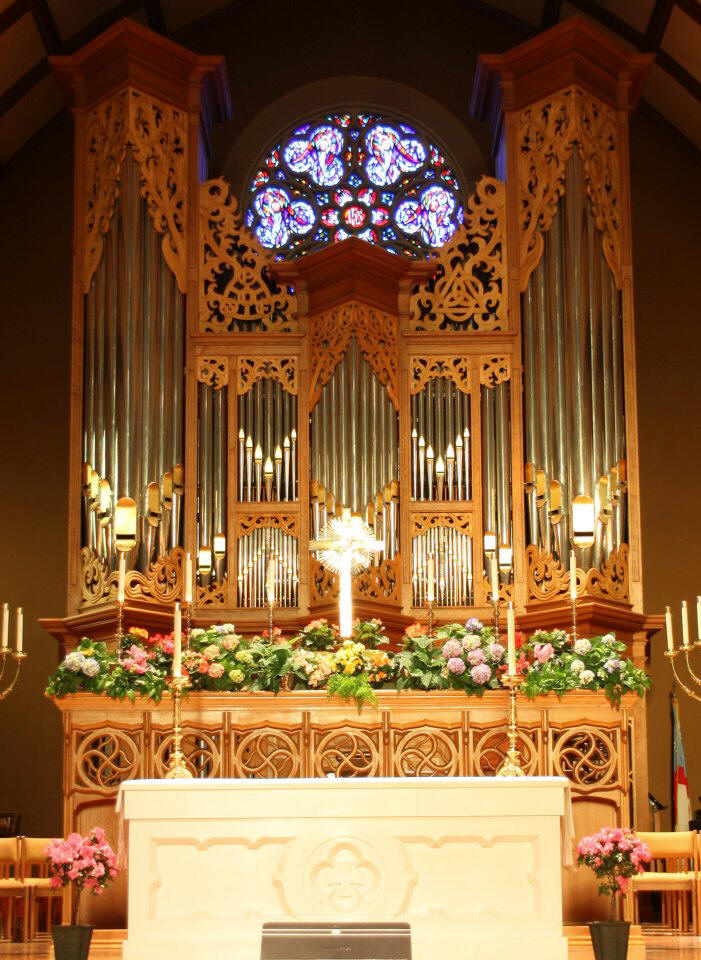 The organ of Trinity Episcopal Cathedral in Portland, Oregon was built in 1984-1987 by Manuel Rosales (opus 11). Its construction was possible thanks to the vision and efforts of Canon Dr. John Strege, the organist at Trinity for 37 years until his retirement in 2010, and through a generous gift of Bea Gerlinger that covered the bulk of the cost of the organ. Many parishioners volunteered during construction and installation, which occurred at the same time as extensive chancel renovations and improvements.

The commission for the new organ was given to Manuel Rosales, an organ builder who was developing a reputation as one of the most inspired organ builders in the United States. John Strege’s vision was to create a magnificent and powerful liturgical instrument which would shine in big concert pieces as well as in early music or chamber works. He was inspired by French cathedral organs, especially by the St. Sulpice organ in Paris. The instrument is not, however, a copy of any existing organ; instead, Manuel Rosales made his own statement. Indeed, according to numerous testimonies, opus 11 is not only a really good organ, but it also mirrors well the character of its builder: A lot of power, a lot of energy, clarity of speech, strong character of voices, rich and exuberant ensembles. For example, the Cromorne of the Positive division has probably the most Cromorne character ever heard - a true "Cromorne Mirabilis" as it is sometimes called by its intimate fans. After installation, full organ was measured in the arch at the front of the transept at a staggering 109dB. Hearing this organ in person is a visceral experience not soon forgotten, thanks especially to the exciting fire of its reeds. But its awesome power is matched by its beauty, with many delicate details such as the presence of both a Bourdon 8 and Flute Harmonique 8 on the swell, a harmonic flute chorus of 8-4-2, and meticulous voicing throughout the organ that allows many stops to serve as colorful solo stops. There is an 8’ Principal on all three divisions, and each division has a Cornet of varying colors for use in French, Flemish, and English music. Barbara Owen characterized the instrument as a "neo-Baroque in concept, with a Romantic gesture". Well, it is an American eclectic organ, one of the best of its kind, with a clear French symphonic influence.

The "Positif" sits at the top of the organ case, played from the lowest keyboard, formed along the Classical French traditions. This is where we meet the (neo)-Baroque elements most. (Try it yourself by retuning the instrument to a meantone tuning using the Hauptwerk Temperament Menu.) The middle keyboard operates the “Grand Orgue” with its enormous Principal chorus starting with the Prestant 16 in the facade and crowned with eleven (!) ranks of a Mixture. The sonority and the harmonic richness of this chorus is rarely met. The pipes for this division are below the Positif, at the level of the impost. The top keyboard operates the "Récit expressif", the swell enclosed division of a symphonic type, located at floor level. The pedal is located in the main case at impost level, with the low-pitched stops behind the organ case. The pedal offers a solid foundation to the instrument, including two large-scale 32' stops: a Bourdon 32' constructed for this organ, and a reused Magnaton 32' by Austin from 1905, restored and named Contra Trombone 32'. Low C of this full-length stop is a nearly 40cm (15”) in diameter. The other two 32' stops are acoustical, using deep quints of the Bombarde 16' and a bass cornet from the Open Wood 16' to produce an illusion of another strong 32' fundamental.

Opus 11 contains 54 stops and 85 ranks on 93mm of wind. The wind for the organ is regulated by three large wedge-shaped bellows and wind stabilizers that can be turned off as desired for 17th-18th century literature. This feature is faithfully modelled in the sample set.

The instrument has electric stop action, but suspended mechanical key action. The organ case is of white oak. The pipe shades, carved of basswood, contain imagery of the Trinity, and the leaf design is based on the species Heracleum lanatum (common name: Cow parsnip) that grows in the Pacific Northwest.

Further reading:
http://trinity-episcopal.org/music/rosales-organ
http://rosales.com/instruments/op11/index.htm
R25 - Rosales Opus 11, a booklet published for the 25th anniversary of the dedication of the organ.

Special thanks to Erik Simmons for his massive support during the recording sessions and for showing us the beauty of Oregon.

Polyphony of 1800 simultaneous pipes recommended for use of the wet sample set.

Tremulants: The original organ has two tremulants. One pedal tremulant, and a single manual tremulant, affecting all three manuals simultaneously. This was changed in the virtual model. Two manual tremulants are modelled, one independent for the Swell and the other for the first and second manual together.

Bombarde 32': the original Bombarde is acoustic only stop. We added a real Bombarde 32' to the virtual model as adviced by Manuel Rosales.

Version 1.35 is to be downloaded from the "My Products" inside the user area.
My Cart