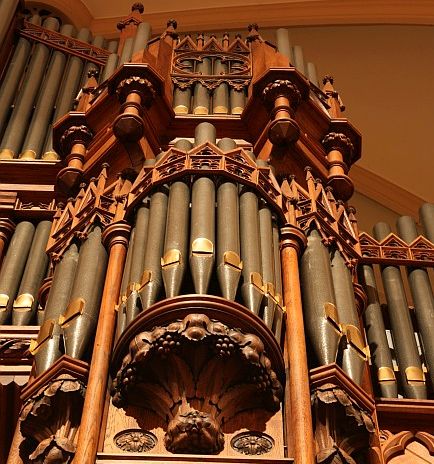 The organ was built in 1860s by William Hill, originally for St. Paul's Church in Burton, before being transferred and installed in the Trinity Methodist and United Reformed Church in Burton-upon-Trent in 1896. This pipe organ has wowed worshipers and music lovers there for 150 years. Rev. Julia Pellett, superintendent minister of the Burton Methodist circuit, said: "It was one of the best organs around, and people who had never heard it before were completely taken aback by the sound of it, which was just brilliant." Due to dwindling attendances the church was closed recently, and the organ found its new home in the German capital, Berlin. It was installed in St. Afra church in Gesundbrunnen in 2015.

The builder of the organ was William Hill (1789-1871), an apprentice of Thomas Elliot. His career is remarkable within English organbuilding. In 1925, he became a co-owner of the company Elliot & Hill, later renamed to Hill & Son. The company soon earned an excellent reputation. Hill was an innovative figure, experimenting with large compasses (keyboards extended to low CC), large scales, new stop types, and high wind pressures. In 1840, his Birmingham Town Hall instrument was the first organ in the world to have a high pressure reed stop, a feature which later became the landmark of the English organ, named usually the Grand Ophicleide or Tuba Mirabilis. By the middle of the 19th century, he developed an organ style that represented a radical departure from the older English style. It was called the "German system". All manual divisions commenced on C, an independent and fully developed Pedal division was adopted, the stop list was enriched by a palette of German inspired flute and string stops, and swell divisions grew large. Hill pursued his quest for an instrument that combined power with musical versatility. He wanted to develop an organ that could play both the works of J. S. Bach and orchestral transcriptions. In 1889, the company led by his son built what was at that time the largest organ in the world for Sydney Town Hall in Australia. This organ had 5 keyboards, 127 stops and possessed a 64' Contra Trombone with full length resonators! The organ is very much still in existence, currently in excellent condition and - apart from its pitch being lowered to A=440 in 1939 - it's now very close to its original state, including the tubular-pneumatic key and stop actions.

In 1916, the company merged with Norman & Beard. The achievements of the next generation of organbuilders (such as H. Willis or T. C. Lewis) were heavily indebted to Hill's pioneering efforts.

The Anglican liturgy requires organ to support congregational singing, including the accompaniment of the famous British boys and girls choirs, as it underlines their singing with voices that are unique, dynamic, colorful, highly differentiated, yet also form a consistent whole. The flexibility of the English organ is also in accordance with the secular use of organs, which became popular in the Victorian era. The great Town Halls began to install organs to present concerts of Romantic organ music and large orchestral compositions. A fusion of German and French tastes was adapted in England to form a kind of organ that could be used for both liturgical and concert purposes. The organ from Burton (now Berlin) has more than 2000 pipes, 48 sounding stops on 3 manuals and a pedal.

Summary of the history of the organ is available from Iain Stinson.

Special thanks to Martin Kondziella for all his help during the preparations, recording and development.

The samples are offered in 48kHz/24bit resolution. The multiple releases have three levels: short, mid and long. Hauptwerk v4.2 and higher supported. The sample set is offered in a plain wave format, no encryption.

The sample set is offered in a Surround variant (6 channels). There are two front direct channels, additional two front diffuse channels and two rear channels. The front direct and diffuse channels can be mixed together to achieve any desired blend, or any of the channels can be used alone. Also, the front and rear audio channels can be mixed or used separately - depending on the preferences of the user. A dedicated "mixing desk" is available in Hauptwerk to mix the sound to the desired level. To reproduce the surround format, an audio card with at least 4 output channels is required, dedicating the four front channels for the front speakers, and other two channels for the rear speakers.