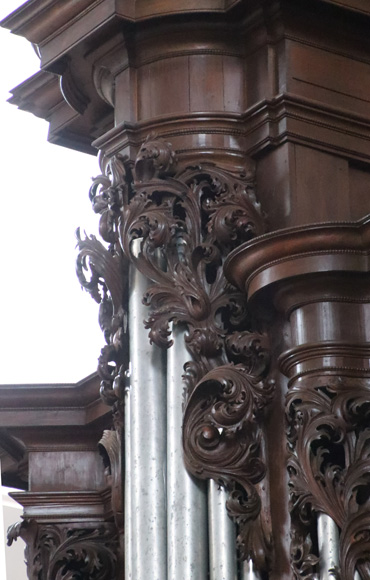 The splendidly decorated church of Polná was built between 1700–08 according to the plans of the Italian architect Domenico d'Angeli under the patronage of the Prince Leopold von Dietrichstein, the owner of the Polná region. The organ was supplied in 1708 by Johann David Sieber (ca. 1670–1723), who apprenticed with Halbich organ builders in Králíky. Jiří Sehnal calls Sieber the best Moravian organ builder of 18th century. He was able to manufacture larger instruments than his competitors (up to ca. 40 stops on 3 manuals) and was renowned for the quality of his craftsmanship and technical inventiveness. His organ in St. Michael's Church in Vienna had a better reputation that the instrument of F. Römer in the Stephansdom. Sehnal lists 18 organs built by Sieber during his short life span.

The Sieber organ for Polná was his fourth largest instrument, and it was perfectly preserved in original form through to the present. Jürgen Ahrend studied the Polná instrument carefully when reconstructing the Sieber organ in Vienna (1986–87). The organists of Polná still remember that Ahrend restored the resonators of the pedal Trumpet in Polná in the gratitude for the research he could conduct there.

The organ was neatly overhauled by a consortium of Czech organ building companies in 2017. The companies were: MgA. Dalibor Michek (Puklice - Studénky u Jihlavy), Dlabal - Mettler (Bílsko u Olomouce), and MgA. Marek Vorlíček (Domažlice). The organ was dismantled and transported to the various organ workshops. The case of the instrument remained on the site, restored by Jan Mach from Červený Kostelec. The organ was heavily infested by wood-eating insects. Although according to the restorers, it was fortunate that it was worms and not humans that did most of the damage. Although the parts were dilapidated and worn, they were preserved in a very original (unchanged) condition. The original fifth comma mean-tone temperament could be identified and the organ re-tuned. The manual keyboards turned out to be the original Sieber keyboards, which is truly unique for an organ this old. These are some of the oldest surviving keyboards in the Czech realm. According to Martin Lexa on the website of the Polná parish, it was possible to restore the original winding: four large wedge bellows located in the church tower.

The Polná organ is a two manual instrument with 31 speaking stops. The upper manual is the Hauptwerk (Great Organ) with 16 stops. The typical feature of the division is the complete pyramid of the Principal chorus, crowned with a high pitched Mixtura and a Cymbel. Ahrend warns against using the Cymbel in the plenum, but I know from experience that Cymbels are often used in a plenum in the Czech organ music. The plenum of the Czech (South German) instruments is completely different in character from the North German plena, and the high pitched mutations play the decisive role in the pungent, fierce, and bright result. The Hauptwerk division is completed by flute stops of quiet intonation, highly contrasting with the principals, and two very soft string stops—again a very typical element of the Czech baroque organ design. The Gamba has a sound of a conical flute, and thus can be used as a substitution of a Gedackt 8', the absence of which in the specification is surprising. The lower manual is the Positiv with 8 stops, designed in typical fashion as the small brother of the Hauptwerk. Again, the principal chorus is built up to the highest pitches, adding the top floor to the sound spectrum when coupled to Hauptwerk. The pedal is a division designed to support the last chords of the music, or provide a drone for toccatas. It only includes 12 chromatic tones (the lowest octave), although the pedal board has 18 keys, which is the usual number for Czech baroque instruments. Although reed stops were extremely rare on Czech baroque instruments, the pedal of the Polná instrument offers two: a Schnarrbass 16' with wooden resonators and a Trompetbass 8'. Sehnal mentions that there is an inscription "Hub" on the chest of the Positiv, which may suggest a place for a reed Hobois, but as far as we can track the existing organ disposition, there has always been the Superoctava 1' on that slider.

The design of the organ of Polná is perfectly fitting the style of musica figuralis performed during the sacred liturgies in the 18th and 19th centuries. The principal role of an organ, although a larger one, was to be a part of the orchestra, performing continuo and obligato parts. For typical music, performed from the church balconies in the Czech lands visit, for example, the web page of the ensemble Musica figuralis to hear their audio excerpts. Or think of Vivaldi organ concertos or similar music. For the indigenous organ music of the period, search for the composers Stecher, Černohorský, Zach, Seger, Linek, Brixi, Vaňhal, Koželuh, Kuchař, and Kopřiva.

The samples are offered in 48kHz/24bit resolution. The multiple releases have three levels: short, mid and long. Hauptwerk v4.2 and higher supported. The sample set is offered in plain wave format. The reverb time is ca. 5 seconds.

The organ has no tremulant.

The sample set is offered in 8 channels. Six channels may be used to form a surround sample set. There are direct channels, featuring the sound of the organ in front of the organ case. The diffuse perspective captured the sound in the church, further from the organ. The rear perspective is designed for the rear speakers of the audio setup. The perspectives can be mixed together freely to achieve any virtual listening position, or used separately - depending on the prefererences of the user. A dedicated "mixing desk" is available in Hauptwerk to mix the sound to the desired level.

In addition to the usual perspectives, there is a stereo perspective captured near the head of the organist at the console. The organist's perspective should not be mixed with other perspectives, because it does not give useful result. For this reason, its default volume is 0. The purpose of the perspective is paedagogical. It can be used to compare the sound perception near the organ console with that of the listener in the church. It is a known phenomenon, that the organist hears the instrument with improper ballance between divisions, stops or their parts. Switching perspectives in Hauptwerk gives the possibility to test the phenomenon and hear it clearly. Here, in Polná, the discant of the Hauptwerk is little heard at the console, while the Positiv is very prominent. However, the sound is well balanced further in the church. The organist should be aware of this phenomenon and adjust the performance accordingly.