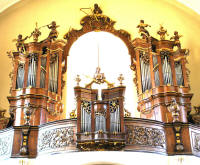 According to the label found in the pallet box of the chair organ of Kdousov, the organ was built by Ignaz Florian Casparides (died around 1773) in 1757. But since the church itself was built later (finished in 1775) and also the decoration of the organ case resembles the work of his pupil, organbuilder Joseph Silberbauer, we may assume that the organ was built by Joseph Silberbauer around 1787, most probably using slightly older instrument parts by Casparides.

The decoration of the pipes is also similar to that used by Casparides. The organ was somewhat romanticised in 1900 when the ranks or the mixture were altered and a romantic Gamba was added. In 1996 the organ was restored to its original state by Dusan Doubek.

The two-manual instrument is divided into three cases, the chair organ (Rückpositiv) located in the balustrade, while the great organ and the pedal share the two bigger cases, the typical Czech baroque divided-chest is used producing a spectacular "stereo" effect: all C pipes speak from the left side, all D (C# in the upper octaves) pipes from the other side.

Bright sound and a strong individual character of the stops are the prominent features of this historical instrument.

Each pipe of the instrument was sampled one by one including the original reverberation of the room (the wet approach). The reverberation time is about 2 seconds. Three levels of releases included.  The sample set is available in 24 bit depth and 48 kHz resolution.

To emulate the original compass, please use the Short octave option in the Organ settings / Organ preferences / Main tab.