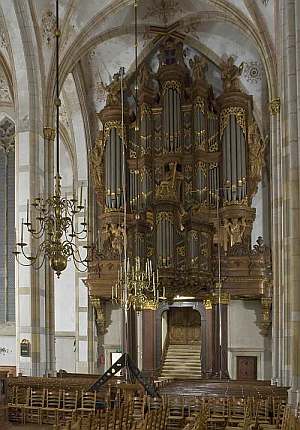 The Schnitger organ of the “Grote of St. Michaelskerk” in Zwolle (1721)

The history and the fate of the Zwolle St. Michaelskerk organ is quite typical of almost all important European instruments: Built by the prestigious baroque organbuilding family Schnitger, subject to  alterations mirroring the changeable fashion of different periods and finally restored back to its supposed baroque form.

In the beginning, the Grote church of Zwolle, also called St. Michaels church, had three organs: two small instruments and a larger one. The first note about the main organ, dates from 1505. At that time, Johannes Jacobsz van Bilsteyn from Rhenen built a large organ with 3 manuals and pedal: the Hoofdwerk (Great) was constructed as Blokwerk, with all 32 up to 34 voices sounding at the same time, the Bovenwerk (Echo) with 4 or 5 voices and the Rugpositief (Positiv) with 4 voices. In 1643, Jan Morlet III from Arnhem modernized this organ and made the basic voices of the Blokwerk playable on the Pedals. In 1669, the tower of St. Michaels (which at 128 meters was the tallest in the Netherlands) burnt down after being struck by lightning, also partly destroying the main organ. Because lack of finances for costly repair, the organ was disassembled and stored. For more than 30 years, the congregation worshipped without an organ, until in 1718 Bernard Hüte, physician and town mayor of Zwolle donated 12.000 guilders for the construction of a new organ. His brother Thomas added another 2.000 guilders.

At that time, a Zwolle merchant, in Hamburg on bussiness, met Vincent Lübeck, organist at St. Nicolai, Hamburg, who recommended Arp Schnitger to the Zwolle authorities as builder for the new organ. This resulted in the assignment to construct a new organ in Zwolle. On January 3, 1719, Arp Schnitger signed a contract to make an organ with 46 stops, consisting of Ober Manual (16 feet based), Unter Manual (8 feet based), Rückpositiv (8 feet based) and Pedal (16 feet based). The agreed price was 11.000 guilders, on the condition that the city of Zwolle would deliver the needed materials of stone, wood and iron. The unused Catholic church in Zwolle was given to Arp Schnitger and his sons Frans Caspar Schnitger and Johann Georg Schnitger as a workshop for the construction. Because Arp Schnitger died in 1719, some months after the beginning of the construction, his sons completed the new organ in 1721. It was examined by three well known Dutch organists over the course of 12 days and they found that the Schnitgers had delivered an organ of 63 stops (whereas the contract of 1719 called for only 46 and the second contract called for a fourth manual as a Borstwerk with 11 extra stops), in addition to other improvements. In their report, they were full of praise for the organ, but they also passed some criticism. Some of the voices were not strong enough and others had not been modeled after the best ones in certain other Dutch organs. They also objected to the pitch and temperament with regard to using the organ with other instruments. The Schnitgers had tuned the organ to "chorton", but the examiners asserted that a lower pitch was in general use in the Netherlands. In their letter of October 6, 1721, the brothers Schnitger refuted this criticism, resulting in the cancellation of proposed modifications. Up to his death, in 1729, Frans Caspar Schnitger took care for the maintenance of the instrument. This task was taken over by Albertus Anthoni Hinsz, the successor in the family undertaking, who married the widow of Schnitger. His stepson Frans Caspar assisted him and later on Heinrich Hermann Freytag and his son Herman Eberhard also.

Over the course of time the organ experienced numerous detrimental modifications. Especially notable are the extensive restoration and modifications, carried out in 1837 by Petrus van Oeckelen (Groningen), including changing the organ to equal temperament. Later on modifications were carried out by J.C. Scheuer (Zwolle) in 1873, van Oeckelen in 1883 (including the deplorable alteration of most mixture and some reed stops), J. Proper in 1910 and Van Dam in 1925.
After the Second World War, a comprehensive renovation turned out to be indispensable. After many discussions it was decided to return the organ very close to the original situation in 1721, recovering also the original high pitch ( a’= 502 Hz). In 1950, organ builder Dirk Andries Flentrop (Zaandam), was charged with this task, which he carried out in the period 1953-1955. It appeared that the chaos of pipes over centuries, made by different organ builders, still contained sufficient original material to reconstruct the original Schnitgerian scales. The restoration plan included repairing of the pipe work, attaching new ivory on the keys and the construction of new pedals. Although some later introduced modifications remained preserved, the disposition of Schnitger was restored as good as possible by using the original materials, and, if necessary, also by new pipes made by Flentrop. Given the Neo-Baroque ideals at that time frame, the restoration has been carried out very conscientious. But later on ideas about the ideal organ sound changed and knowledge about restoration of organs improved. Therefore, Flentrop, in the last two decades carried out a series of additional voicing corrections, in order to arrive more closely to the authentic starting point. Especially, lowering the wind pressure to approx. 78 mm and the voicing corrections based on this value had beneficial effect on the timbre of the organ.

The sample set is available in wave format 48kHz/24bit. The version currently distributed is 2.5.  Hauptwerk v.5 and higher required. The sample set is encrypted, dongle protected. Hauptwerk Advanced version is strongly recommended, the Lite version is not suitable to run the Surround variant of the sample set (memory limitations, audio channels limitations). There are three different sample sets derived from the audio material recorded in Zwolle.

Zwolle Dry - no reverberation included. Dual-mono, close-up-recorded samples were used. You will have to add your own reverb to get the "wet" organ sound. Hauptwerk provides a robust convolution reverb engine and Sonus Paradisi provides hundreds of impulse responses for a vast variety of reverbs. In this way you can move the instrument virtually into any desired environment (small church, large cathedral, concert hall...). Remember to adjust voicing to achieve well balanced organ sound matching different environments.

Zwolle Surround - original acoustics of the church captured including the rear audio channels. There are three release samples for each pipe (staccato, portato, long); 4 release samples are offered where necessary.While the traditional wet sample sets are composed of samples with 2 channels (left, right), the surround recording uses 4 independent channels for each virtual pipe (for each sample). Imagine standing in the church heading the organ. You hear the organ in front of you, but you also hear the reverberation of the church which is all around you, comming to your ears from all the directions. This is how the surround sample set is formed. The sound of the organ is captured by the "front" microphones, the church response by the "rear" microphones. 4 channels are extracted from the recording. Two channels are used to supply the sound of the organ for the front speakers, while the 2 other channels offer the diffused (reflected) sound comming to you from the church. You can use these two channels to feed your surround (rear) speakers. In this way, the realism of the reproduction is greately increased, since you may feel as being "inside" the sound field, experiencing not only left-right dimension of the sound, but also the front-back dimension. You hear the sound of the organ, but also the sound which returns to you from the church nave, all in perfect synchronization and localization. Please note, that at least 4 speakers are needed to reproduce the multi-channel audio. Remember to set up the Hauptwerk audio outputs well to accomodate the four channels. The ranks which are designed for the rear channels are marked with the word "rear".

Zwolle Wet - original reverberation icluded. O.R.T.F. stereo recording technique was used to capture the sound of the instrument. The microphone pair was placed about 10 meters in front of the organ. Multiple releases supported for each sample. The reverberation time is about 5 seconds. The wet version of the Zwolle Organ Model is a part of the Surround version, only that the rear portion of the audio is muted in the rank routing dialog box before loading the virtual organ.

All the ranks of the Zwolle Surround sample set are equipped with the dual channel tremulant model, which greatly enhances the Hauptwerk artificial tremulant behavior. Especially, if the surround sample set is used combined into a single stereo audio output, the tremulant sounds indeed convincing.

Technical conditions based on our own measurement