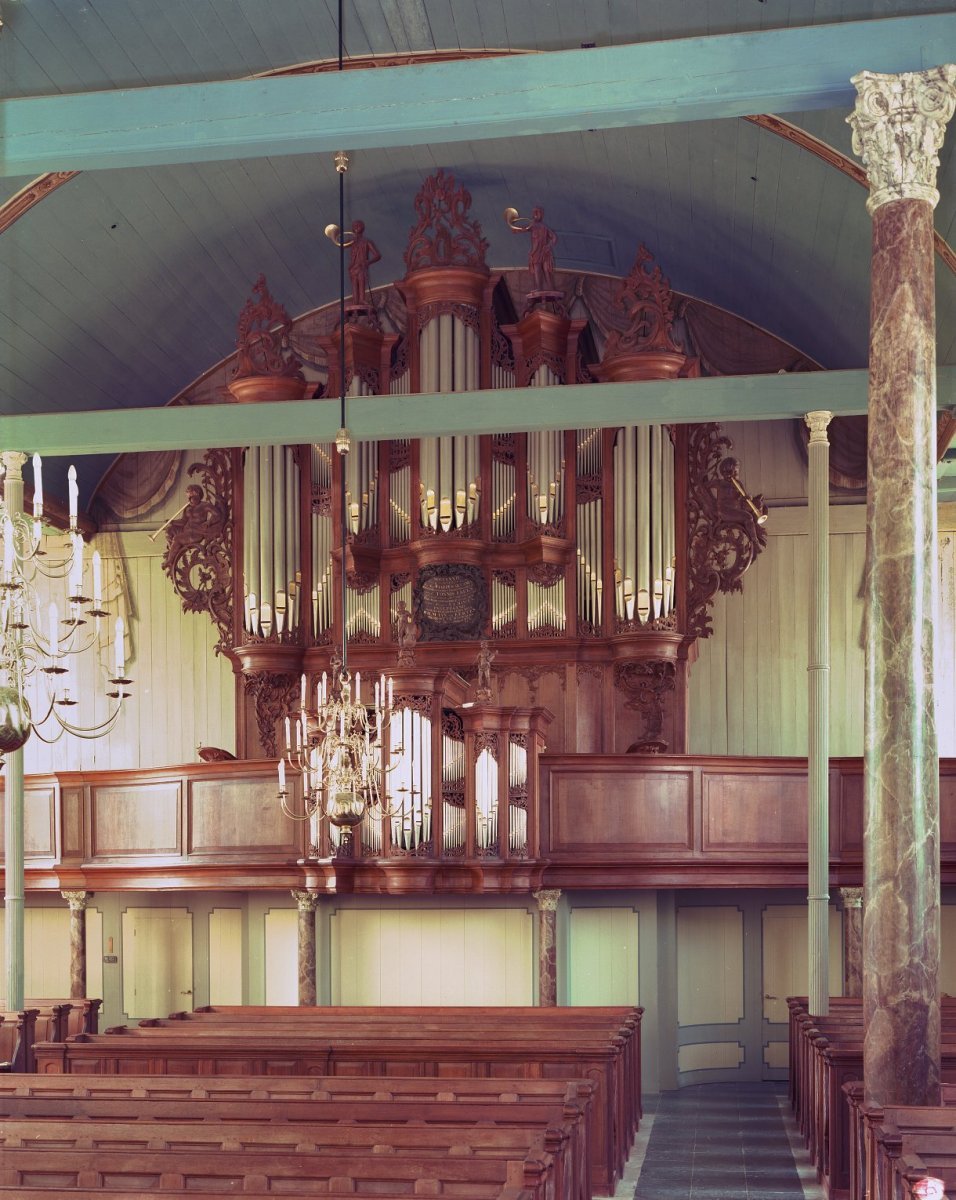 The pipe organ composed of 33 stops located in the Midwolda Reformed church is the largest instrument built by Albertus Antony "Hints" in the province of Groningen. The unusual spelling of the name of the organbuilder commonly known as Hinsz is found on the plaque above the organ console. The organ is one of his late works, distinguished by a fundamental oriented sound. The mixture is high pitched in bass, but sounds dark in the treble due to a tierce rank and 16 feet foundation. It was intended to support congregational singing, together with the cornet. Both manuals have a complete flute choir. The HW Praestant 8' has two unisono ranks in treble. The pedal is completely stand alone, containing a full reed chorus (16', 8', 4', 2'), but lacking a Pedal Mixture.

The organ was delivered by the builder in 1772. Immediately it became famous and praised among contemporaries as Joachim Hess testified. Nevertheless, the instrument was subject to various alterations during its history. Hermann Eberhard Freytag added a pedal coupler in 1834, and replaced the RW Scherp with a Fluit-Travers. In 1897, Petrus van Oeckelen added a Gamba, removed tierce ranks, repitched the organ to 440 Hz (the original Hints pitch was 415 Hz) by shortening pipes, wind pressure was raised considerably. Flentrop company performed a restoration of the instrument in 1970-72, although it retained many elements introduced by van Oeckelen, including the non-original pitch of the instrument. However, the tierce ranks were restored (HW Mixture and RW Sesquialtera) and the RW Scherp was reconstructed. Nowadays, the pitch of the organ has been lowered slightly, it was about 434 Hz when recorded by Sonus Paradisi, and an uneven temperament similar to Valotti-Young was introduced. The organ is valuable for a high amount (95%) of original Hints pipes.

Special thanks to Mr. Ludolf Heikens for his support during the recording sessions!

Interesting link to the 3D model of the interior of the church.

The samples are offered in 48kHz/24bit resolution. The multiple releases have three levels: short, mid and long. Hauptwerk v. 5 and higher supported. The sample set is encrypted and dongle protected, which means that it can be used with Hauptwerk software exclusively. Hauptwerk Advanced version is strongly recommended, the Lite version is not suitable to run the Surround variant of the sample set (memory limitations, audio channels limitations). There is no use of the sample set possible in any other software.

The sample set is offered in a Surround variant. The microphones were arranged in the typical Sonus Paradisi setup. Two microphones captured the sound relatively near to the organ, other two microphones captured the sound at greater distance from the organ (diffuse sound) and two microphones heading away from the organ captured the response of the church (rear). In total, there are 4 front audio channels and 2 rear channels. The two front pairs can either be mixed together freely to achieve any listening position between the two extremes, favoring direct or diffuse organ sound, or used separately - depending on the prefererences of the user. A dedicated "mixing desk" is available in Hauptwerk to mix the sound to the desired level.

The organ has one single tremulant working on the entire instrument. The extended variant of the sample set offers 3 independent tremulants for each of the divisions (HW, RW, Pedaal). All stops were recorded with tremulant engaged, so that naturally recorded tremmed samples can be heard when a stop is drawn together with the corresponding tremulant. When necessary or wished, one can disable all the tremmed ranks (to save RAM, for example) and use the Hauptwerk artificial tremulant model.

Polyphony of 5000 voices recommended for the full suround (2500 pipes minimum).