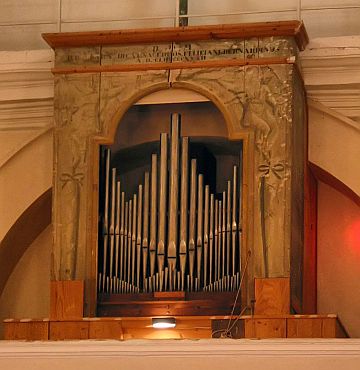 The Italian Greccio is a town in the region called the Saint Valley (Valle santa). It is known for the first setting of the Chrismass crib scene (crèche). St. Francis (San Francesco) and his colleagues were the first in the world to perform this living scene, employing a baby to represent the newborn Jesus and the ox and the donkey standing by. This happened in the thirteenth century.

Greccio's modest church contains a small organ of the Italian type from the 19th century, built by Alderano C. Spada e Figli company. The organ is from the year 1831. The organ was restored by A. Piccinelli in 1985.

The organ original tuning is meantone.

The sample set is wet, recorded with the acoustics of the church, but the level of the reverberation is low, the recording position was close to the instrument (the "moist" approach).