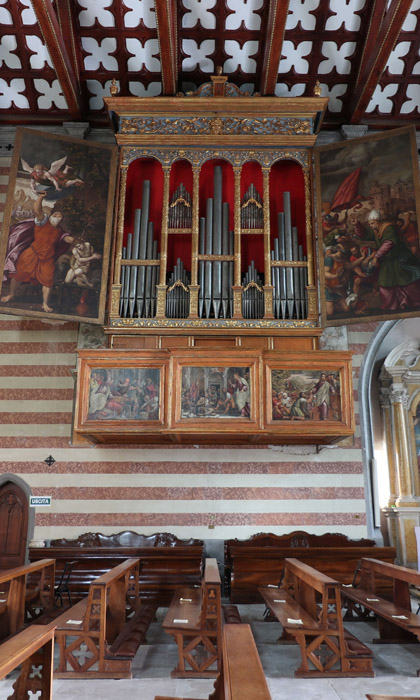 The organ in the gothic church of St. Corpus Christi in Valvasone was constructed by Vincenzo Colombi in 1532–1533. It was located in a balcony on the right wall of the church. The organ case was completed in 1535, and between 1535—1538 it was decorated with carvings done by Girolamo di Venezia and donated by Tommaso Mioni da Udine. The organ was to be further embellished by paintings by Il Pordenone (Giovanni Antonio de' Sacchis), but he died before the work could be finished. After 1539, the paintings were instead completed by Pomponio Amalteo. The doors of the organ case depict scenes from the Old Testament: the Sacrifice of Isaac is on the left wing panel, and the Sacrifice of Melchizedek is on the right wing panel. On the balcony itself, there are scenes from the New Testament.

Various changes to pipes and stops were carried out during the seventeenth through nineteenth centuries. At the beginning of the twentieth century, the organ was no longer playable and was left abandoned.

The first restoration of the instrument occurred during 1972–1974 and was performed by Alfredo Piccinelli. A second restoration by Francesco Zanin followed in 1999. Zanin brought the instrument back to its original Renaissance condition, including the original spring windchest.

The organ consists of a single manual with an unusual (by today's standards) compass of 47 keys (FGA-f3) and a pull-down pedal of Italian style (FGA-d1). The stops form a typical Italian plenum composed of individual principal-scaled ranks. There is also a flute at 4' pitch. The organ has a tremulant, labeled "Fiffaro" under its switch. The organ is winded by three wedge bellows, and the wind pressure is 43 mm (water column measurement).

All ranks were recorded with and without tremulants where available for the most convincing tremulant behavior. It is possible to use artificial (waveform) tremulant instead to save RAM (the switch is located on the mixer tab). You can choose to omit some or all of the sampled tremulant ranks when you load the organ the first time.

The organ was recorded in 5 microphone perspectives in varying distance from the instrument (and various micing techniques), giving vast mixing possibilities.

Polyphony of 2000 voices recommended for the full suround.

In addition to the Semi-Dry variant, the surround also contains these microphone perspectives:

Front diffuse channels - captured at mid distance from the organ, where the sound had an excellent balance of direct and reverberated sound. These channels can be used alone for simple stereo applications, or as a front channels for surround.

The 10-Channel Surround variant of the model includes the Front Diffuse and Rear channels.

In total, there are eight front channels and two rear channels available. In the Full Surround variant, the front and rear audio channels can be mixed or used separately in myriad ways, depending on the preferences of  the user. A dedicated "mixing desk" is available in Hauptwerk to mix the sound  to the desired level of "wetness". Note: To reproduce the surround format, an audio card with at least 4 output channels is required, dedicating front channels  (in any desired blend) for the front speakers, and other  two channels for the rear speakers.