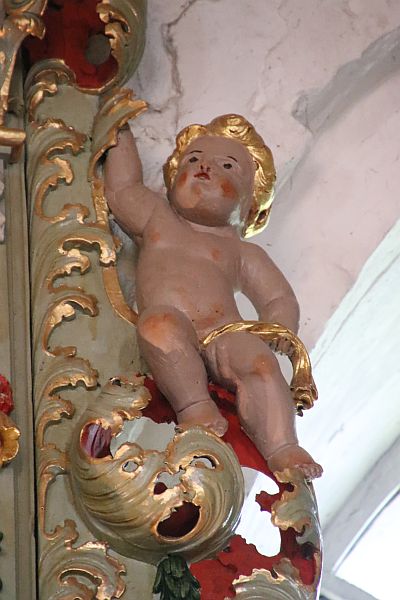 The organ in the church of St. Jacobi, Lüdingworth is an early work of Arp Schnitger, built in 1682–83. Schnitger re-used the entire pipework of the Hauptwerk and Brustpositiv divisions from the earlier instrument by Antonius Wilde. The sound of the late Renaissance organ built by Wilde in 1598–99 is strongly felt in the present instrument! Thus the organ is a highly suitable instrument for Renaissance organ music.

The organ consists of 35 stops across three manuals and pedal. The Hauptwerk offers a full range principal plenum, based on a 16 foot Quintadena. The Trommet 8 possesses the characteristic North German sound. There is the specific Schnitgerian Zimmel, composed of Quart and Sext, offering a non-harmonic series of overtones that resembles the sound of jingle-bells. This Zimmel is never used in a plenum. It is a solo stop used exclusively in fast soloistic passages. The Hauptwerk is complemented by the smaller plenum of the Rückpositiv, where the Terz sound dominates (two Terz stops: Sexquialter and Tertian) as an alternative to the RP Mixtur. The full sound of the Rückpositiv is crowned by the presence of a mighty reed, Dulcian 16. The pedal is a fully independent division with its own principal plenum, and it gives a solid foundation to the sound of the organ with its Trombone 16 and a Trommet 8. The small reed, Cornet 2, is used for pedal solos. A special feature of the design is the asymmetric size of the two pedal towers due to the uneven height of the church ceiling. Thus the largest pipe of the Southern tower is F, while the C, D, E tones all sit together in the Northern tower. The typical renaissance Brustwerk is founded on a reed stop, Regal 8. It was enlarged somewhat in the virtual model with an 8 foot Gedacht. As the result, the model offers 36 speaking stops. In addition, there are two toy stops: a Zimbelstern and the Vogelgesang (Rossignol), indispensable for early music. The pitch of the organ is about one semitone higher than a modern standard pitch a = approx. 469 Hz. The Tremulant acts on the entire instrument.

The organ was well maintained through the 18th and 19th centuries. In the time of the Organ Reform Movement, the organ received much attention. Unfortunately, during this restoration of 1960–61, major changes were introduced: the wind pressure was lowered, the cut-ups of pipes were lowered, the windchests were given concussion bellows and the action was modified. All these changes were undone in the careful restoration of Jürgen Ahrend in 1981–82. The meantone temperament was re-introduced. Since then, the organ in Lüdingworth has once again become one of the most important witnesses of the North German organbuilding.

Polyphony of 5000 voices recommended for the full suround (2000 pipes minimum).

The sample set is offered in the Surround variant (6 channels). There are front-direct (semi-dry) channels, featuring the sound of the organ immediately in front of the organ case. The diffuse perspective captured the sound in the church, further from the organ. The rear perspectives is designed for the rear speakers of the audio setup (where available). The perspectives can be mixed together freely to achieve any virtual listening position, or used separately - depending on the prefererences of the user. A dedicated "mixing desk" is available in Hauptwerk to mix the sound to the desired level.