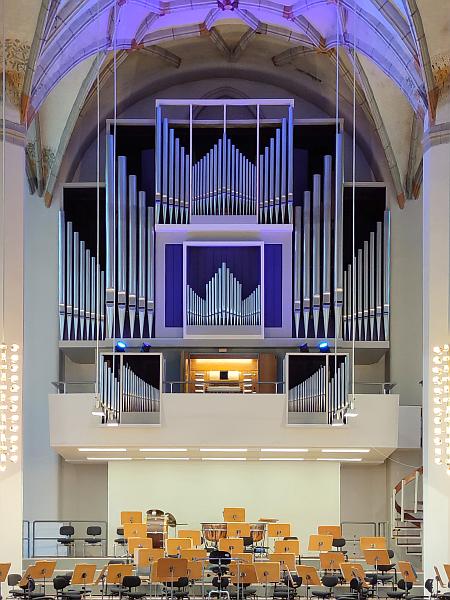 The Carl Philipp Emmanuel Bach Concert Hall in Frankfurt (Oder) was originally a Franciscan monastery. The organ in the hall was built by Sauer in 1975 as Opus 2025. The Sauer company is world famous for top-quality Romantic instruments (such as the Chemnitz organ modeled by Sonus Paradisi). But few people know that the organ building at the company continued throughout the 20th century, and even today the company builds and services pipe organs. In the second half of the 20th century, the company built neo-baroque instruments. as was the current fashion. The Opus 2025 is an excellent representative of this movement. Unlike many instruments of the period, which often have lackluster voicing and a sound that borders on boring, this instrument stands out with its meticulous voicing, especially in the labial stops. For this reason, we have decided to include it in the Sonus Paradisi portfolio.

The organ's layout is typical of its time, based strictly on the "Werkprinzip" hierarchy. Not to be overlooked are the strange aliquots, including septimes and nones, the high-pitched mixtures, and the characteristic dominant flute sound of the foundation stops. The reed registers are rather narrow in sound, always needing to be paired (covered) by a labial stop. Also very successful is the Holzprincipal in the swell, which is essentially a "secret" Flute Harmonique. Thanks to the Sauer tradition of voicing and the craftmanship of this organ, it transcends the narrow confines of the neo-baroque sound ideal.
The organ was overhauled in 2019/20, and a new mobile console has been added to allow the organ to be easily used together with the orchestra. Fortunately, the voicing of the organ was not altered during this restoration, so we can still hear the mastery of Sauer's voicers today.

For the sample set we decided to stick to the layout of the original old console, and from the new console only the newly added couplers were incorporated. Also, we decided to add a single register, namely the Schwebung on the III manual, which can be used together with the Salicional to obtain the typical undulating effect. Although not normally found on the mid-1970s organs in this style, just a few years later Sauer began to build undulating registers into their new organs. This greatly expanded the organ's usefulness for a variety of repertoire.

The samples are offered in 48kHz/24bit resolution. The multiple releases have three levels: short, mid and long. Hauptwerk v4.2 and higher supported. The sample set is offered in a plain wave format, no encryption.

All ranks were recorded with and without tremulants for the most convincing tremulant behavior. However, loading the authentic tremmed ranks consumes large amount of RAM. It is possible to select to use the artificial tremulant instead to save RAM (the switch is located on the mixer tab).

Polyphony of 10.000 voices recommended for the full suround.

The sample set is offered in a Surround variant (6 channels). There are two direct channels, two diffuse channels and two rear channels.

The semi-dry channels were recorded at short distance from the organ.

To reproduce the surround format, an audio card with at least 4 output channels is required, dedicating the direct and diffuse channels for the front speakers, and other two channels for the rear speakers.

** - not a real stop, but an internal coupler drawing the low quint of the engaged pedal stop, to emulate a resultant 32'.