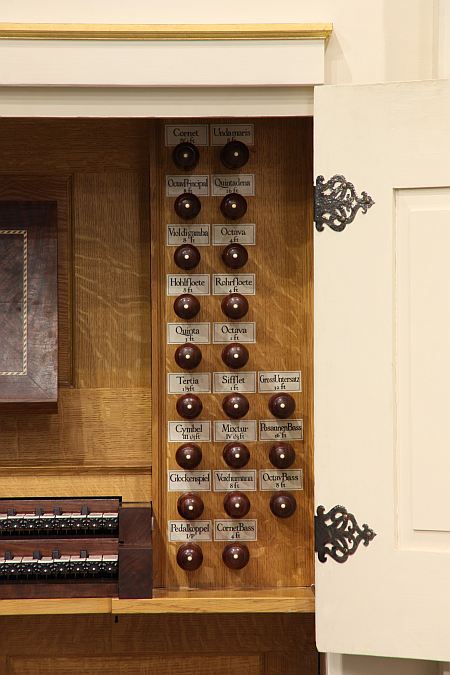 The 2 manual tracker organ owned by the Chico State University (California) was built by Munetaka Yokota according to the aesthetic and artisanal principles of Gottfried Silbermann. The special and unique feature of the instrument is the way it was built.

David Rothe, the music and organ teacher at the university since 1968, met with Munetaka Yokota when he was an apprentice of John Brombaugh and the two visionaries prepared a project of building the organ on site in the same way organs were built several centuries ago. Subsequently, thanks to the efforts of David Rothe, Munetaka Yokota was hired by the university as an "artist in residence" for several years.

Hence, one day in 1984, Munetaka Yokota showed up in a small college town, without a team of trained craftsmen and without materials. He recruited volunteers from the student body and community as his assistants and trained them in the handcraft techniques of the early 18th century as a part of their college curriculum. The city of Chico donated enough wood from the fallen Hooker Oak to construct the pedal board and bench, while local lumber companies contributed wood for the organ’s body. The University Farm donated shin bones from cows in order to fashion the keyboards, and the art department’s sculpture lab created the organs pipes out of melted tin and lead. The metal for the pipes of Yokota’s Silbermann-style organ was cast from lead reclaimed from spent bullets from the LAPD gun range!

In 1990, the organ was meticulously done and it has gained an international reputation since then.

The samples are offered in 48kHz/24bit resolution. The multiple releases have three levels: short, mid and long. Hauptwerk v4.2 and higher supported. The sample set is offered in plain wave format. No encryption.

All ranks were recorded with and without tremulants for the most convincing tremulant behavior. Three lowest pedal stops have no tremulant. Loading the authentic tremmed ranks consumes large amount of RAM. It is possible to select to use the artificial tremulant instead to save RAM (the switch is located on the mixer tab).