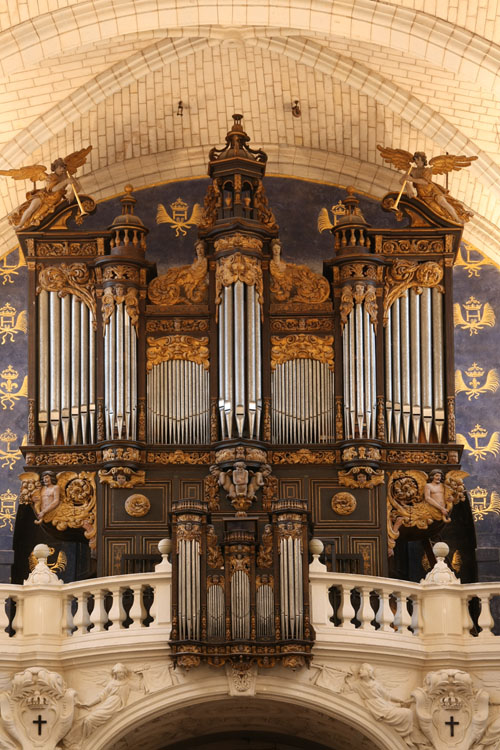 The church of St. Louis was dedicated in 1621 as a part of a college founded by Jesuits for the education of the domestic servants of the king and queen. Later, it became a famous French military college. Among many other outstanding scholars, René Descartes studied there.

The organ case was made in 1638 by Pierre Frileux and Pierre Cornet. In 1640, Ambroise Levasseur was commissioned to build an organ to occupy that lavishly decorated case. In addition to his own work, he used some preexisting ranks and organ parts of unknown origin. The exact stop list of the Levasseur organ is unknown.

Jean Dangeville arrived in December 1772 and lived in the college for six months while working on the organ. He added a second Trompette to the manual and added the echo division among other work. As the result, the instrument then had 30 stops on 4 manuals and pedal.

During 19th century, the instrument underwent various alterations. By 1927, when the organ was inspected, its stoplist differed substantially from the 18th century specification. Among other items, the Grand Orgue had a Salicional, the Positif had an Oboe, the Récit and Echo were completely removed.

Between 1935-1963, the Gonzales organ building company made several repairs to the instrument, returning it in some aspects to its original condition. The complete restoration of the instrument finally occured in 1992-1996. Organbuilders Benoist and Sarelot scrupulously returned the instrument into its baroque state. The voicing was executed by Jean-Pierre Conan. About 1/3 of the pipes are original, dating from the 17th century. The original pitch of a= 392 Hz was restored, and the organ was tuned in a mild unequal temperament similar to that of Werckmeister III.

Polyphony of 5500 voices recommended for the full suround (3000 pipes minimum).

The sample set is offered in the Surround variant (8 channels). There are front-direct (semi-dry) channels, featuring the sound of the organ immediately in front of the organ case. The diffuse and the distant perspectives captured the sound in the church, further from the organ. The rear perspectives is designed for the rear speakers of the audio setup (where available). The perspectives can be mixed together freely to achieve any virtual listening position, or used separately - depending on the prefererences of the user. A dedicated "mixing desk" is available in Hauptwerk to mix the sound to the desired level