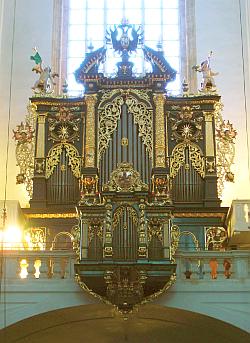 While many virtual models of organs have one specific instrument as the template, we decided to take different approach this time. The advantage of presenting a "South German Organ Model" without a direct connection to certain specific instrument is that it is more clearly shown that all the organs of this family in the given period are quite similar to each other and have many common characteristics, in spite of their differences. These common characteristics of the south German organ building school are: an instrument with two short-octave manuals where the Rückpositiv is shaped to be the "smaller brother" of the Hauptwerk for dynamic and spatial contrast; limited pedal division of 18 tones; mild Principals with an expressive speech even on very low wind pressures; sparkling and light sound of numerous mixtures which often include a tierce rank; great variety of flute stops including the typical wooden Copulas -thinner Gedackts- with non-imitable "chiff"; predominant labial character of the instrument accentuated by total absence of reed stops (with the exception of occasional Fagot-like pedal stop with wooden resonators), early appearance of strings. Anyway, it is good to point out at least two instruments which are probably the most excellent examples of the South German organ building school, milestones marking the boundaries of the given period.

Prague is said to be "Mater urbium" (the Mother of towns). The large gothic church of Our Lady before Tyn in the very centre of the city was an eye-witness to all the key adventures of the Czech nation since these events usually took place at the neighboring Old-Town square. The sanctuary is known especially for its Hussite and Utraquist past. Today, many tourists visit the place to find the tomb of Tycho de Brahe. The church is famous also due to its 17th century organ.  The instrument has to be called "Mater organorum". Indeed, the masterpiece of Johann Heinrich Mundt (1632-1691) finished in 1673 for the church of Our Lady before Tyn is generally considered to be the THE organ. It is the most typical representative of the Czech organ building. Also, it is one of the best preserved instruments from the 17th century in Europe. If you think of a historical Czech organ, it is the first instrument which comes immediately to your mind. The organ was excellently restored in 1998-2000 by Klais (Bonn) thanks to a massive support of the German foundation (Zukunftsfonds). I can say without any exaggeration that it is the dream of every Czech organist to be allowed to touch this instrument.
Detailed essays on the history of the organ and its restoration are available, based on the account of prof. Hans-Wolfgang Theobald (see the bibliography) who was the leading figure of the restoration process. 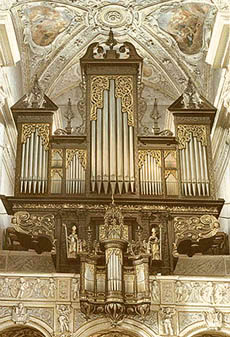 However, the greatest south German instruments offer even greater variety of stops, especially reeds. The most notable document of the early Baroque south German organ building is the monumental Johann Georg Freundt (1590-1667) instrument built for the Klosterneuburg abbey near Wien (finished in 1642). 3-manual instrument built for solistic organ playing on high feasts, while retaining most of the characteristics mentioned above including short bottom octaves and very limited pedal, offers reeds of all kinds: full-, half- and short-resonators. We were examining the Klosterneuburg organ and we wanted to record it for Hauptwerk. The organ itself is in perfect shape. It was restored in an exemplary manner by Kuhn (Männedorf, Switzerland) in 1990. However, the blower noise was extreme (I honestly think that it was the loudest blower noise I ever heard) so we gave up. Nevertheless, we at least took the inspiration how a south German reeds should sound and then we decided to add these timbres to the virtual model of our Prague organ model. Therefore, there is the extended version of the Prague Baroque sample set enriched with these Klosterneuburg-like reeds. Therefore, our virtual model cannot be said to imitate one specific organ, rather it tries to imitate the typical south German sound color.

Version 2.1 is the latest version of the sample set. The sample set is offered in 24-bit, 48kHz resolution. The recording is 2-channel stereo for the wet variant, and mono for the dry variant. The reverberation time up to 5 seconds.

When recorded in February, its pitch was a=434.2Hz at 3°C. That equals to about a=444Hz at 22°C. The virtual organ can be played at the Original Organ Tuning in Hauptwerk, which is the temperament found on the organ while recording. Additional temperament charts are ready for the Hauptwerk software, they install with the full version of the sample set.

"Prague baroque after Theobald" temperament chart is the temperament proposed by dr. Theobald when preparing the restoration of the organ. While seldom used keys as Fis-dur, Cis-dur, As-dur and similar are well in tune, more often used keys as A-dur, E-dur, Es-dur are rather out of tune.

The sample set is offered in two variants (recording perspectives)

The original specification respects fully the Prague Mundt Organ. The Klosterneuburg organ inspired the extension only.