The organ of the Laurenskerk in Rotterdam, Netherlands 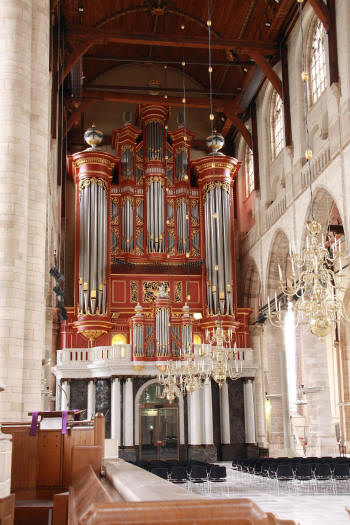 The large gothic church of Rotterdam was built in 15th century. The church was completed in 1525. Four hundred years later it was almost destroyed by a German bombardment in May of the year 1940. The interior of the sanctuary was entirely lost due to fire. There were left only the outer walls and a part of the tower. The restoration of the church was done after the World War, between 1947-1968.

The original church had a large 3 manual organ of Hans Goltfuss from 1644, but a new instrument was to replace it in 1790. The work on the new instrument was not finished before 1828 while several organbuilders successively worked on it. In 1845 Bätz enlarged this instrument to arrive at 72 stops. Nevertheless, this instrument was destroyed completely with the church during the war time. The large organ which we can hear in the church today was built by Marcussen & Son in 1973, the organ case was designed by the architect J. W. Besemer. The instrument is based on 32-foot pedal, it consists of six divisions (Rugwerk, Hoofdwerk, Bovenwerk, Borstwerk, Chamadewerk and Pedaal). It is completely mechanical organ with 85 speaking stops and ca. 7600 pipes. It is said to be the largest purely mechanical organ in Europe. There is, however, the Barker mechanism to be switched on optionally by a foot lever to help the organist when all the manuals are coupled together. However, the full instrument can be operated without this device very well.

One striking feature of the instrument is its multi-rank Principal stops. Practically all the Principals and Octaves 16', 8', 4' of all the divisions are made of more than one unisono souding ranks. I have heard this special feature in Spanish organs for the first time (Palma di Mallorca, Santanyi ...) and it makes the sound of the Principal chorus considerably wide and deep. The timbre gets characteristically rich what cannot be achieved easily if a conventional single rank Principal stops are used. For Hauptwerk recording, this constitutes a special challenge, since the "chorus effect" of the pipes which are often not exactly in tune makes looping really difficult. Only very long samples (around 9-11 seconds) are usable for the virtual model of the organ. Another noteworthy feature is the composition of the mixtures which have unusually high number of ranks as well. The Cimbal of the Bovenwerk is remarkable for its neo-baroque composition including a quart and a sext.

A beta tester comments: "This is a remarkably colorful and beautiful organ whose sound is surprisingly gentle. None of the voicing feels harsh or pushed. Instead, we get double-rank principal stops and large mixtures with many ranks of gently-voiced pipework that result in a natural, unforced sound. In fuller ensembles, the organ roars, but it never screams - even when the chamades are playing. The sound remains beautiful and comfortable even when played for several hours in headphones."

The organ was designed to allow the performance of all organ literature. Indeed, the plenitude of stops, the complete set of horizontal reeds, the French type of reeds, strings in a swell box, rich selection of wide scaled mutations, complete Principal pyramid, full range of stops in pedal - it is all one can dream of. First, I was puzzled by the absense of the French Oboe and I had even thought of adding one virtually, but then, listening to the CDs recorded at the Rotterdam organ by Mr. Hayo Boerema organist-titulaire, convinced me that  that such an addition is not needed. The swell trumpet with a nasard can be used as a convincing substitute. Thus, wide range or organ literature from Renaissance, Baroque, Romanticism up to the modern times can be performed adequately on the instrument.

The sample set can be used in Hauptwerk version 4.2 and higher (incl. HW5), the Advanced version is necessary due to the size of the virtual instrument. Version 1.45 of the sample set published in June, 2021.

Chamadas play from an added fifth manual. This makes the Hauptwerk Master Couplers fully compatible with the Chamade division.

Many ranks of Borstwerk, Rugwerk and Bovenwerk offer recorded tremmed samples (recorded tremulants). These special tremmed ranks can be identified by the word "tremmed" in the rank description. Load these special ranks together with the normal rank to get the correct behavior with the tremulant engaged. Please note: the recorded tremmed samples are available in the wet/surround variant of the sample set. The dry variant of the sample set does not contain any tremmed ranks. The dry version uses the Hauptwerk tremulant model instead.

Variants of the sample set

The Chamadewerk is normally operated from the IIIrd manual by means of a drawstop called Chamade aan. This is the operation as designed by the manufacturer of the organ.
Our virtual model extends the use of the Chamade division by making it a solo division which can be operated either from the IIIrd manual (as the original), or alternatively from the independent Vth manual. Thanks to this arrangement, Hauptwerk Master Couplers work and can be used to expend the number of couplers of this organ.
The original organ has also foot levers to operate the couplers. These were not reproduced as all foot levers only duplicate an operation of a dedicated drawstop. Only the drawstop were reproduced in our virtual model.
One special foot lever exists on the real instrument. It is called a "Barker". This enables the barker machine on the IInd manual to help the player when the instrument is under the full load and fully coupled. This was not reproduced as on digital consoles such mechanism is not needed.

Legend to the virtual layout

this is the view of the wind ways of the instrument, the base for the Hauptwerk wind model. In the upper part, there are 11 hand pumped wedge bellows, the red indicator shows how full/empty the bellow is, the gauge on the side shows the inner pressure inside the bellows. The switches above each bellow show the operation of the bellows. The upper one served to enable or disable the bellows completely (you can run only several bellows if you wish - attention, the organ can become short of air quickly). The lower two buttons show whether the bellows is inflating (left button) or deflating (right button). The small "windows" under each set of bellows show how air is going from the bellows to the windchests of the organ. If it is closed, no air is going to windchest, if it is open, air is going from the bellows to the windchest. In the lower corner of this wiew, there are gauges to measure the pressure each of the windchest (some divisions have split windchests). 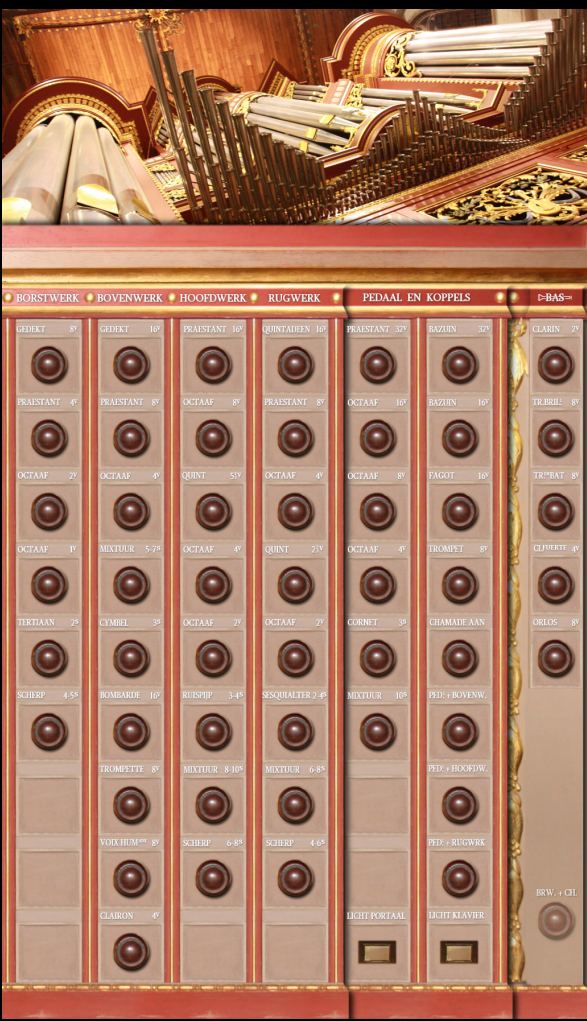 the left and right stop jamb offer the portrait orientation (vertical) as an alternative.

for a single touch screen, this is the stop jamb to be used. All the stops of the organ can be found there. This view allows for landscape and wide landscape oritantion, according to the size of the touchscreen used. Please note, that the foot levers found on the original organ were not reproduced, since they only duplicate hand drawstops which are available. All features of the organ can be controlled by the drawstops, hence the foot levers were omitted. You may, however, attach your MIDI foot pistons to any drawstop to imitate the behavior of the original organ. The attaching of the physical piston to a button on screen is done by right-clicking on the button. You may attach more than one MIDI physical switch to any of the drawstops on the screen.

Volume of the front and rear (resp. dry) channels can be adjusted. Blower noise and the Tracker noise can be adjusted. Pipe couplind and pipe detune sliders can be used to increase or decrease the overall level of mistuning of the organ pipes. The mixer settings can be stored, reset and recalled via the corresponding switches.

No updates. The latest version can be downloaded directly from the user area ("My Products").
My Cart