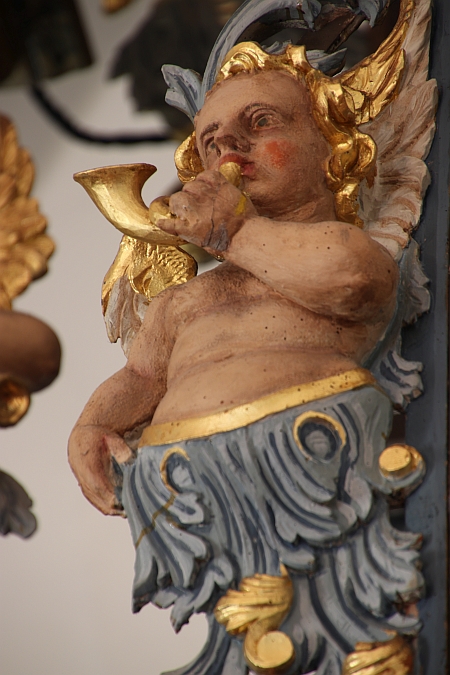 The St. Nikolai church in Altenbruch owns one of the oldest North German organs. In 1497-1498, Johannes Coci built a small organ of 6 stops. It stood near the main altar. Matthias Mahn enlarged the instrument in 1577 (or 1561?) by adding a Rückpositiv.Today, some of the Coci organ's pipes are still incorporated into the RP Gedact 8', OW Quintadohn 16', and Pedal Untersatz 16'. Other pre-1647 pipe material is to be found in the RP Principahl 8', Octav 4', Nasat 3', and Blockfloit 2'.

In 1647, Hans Christoph Fritzsche renewed the organ, enlarging the Hauptwerk as well. The Principal plenum of the Hauptwerk (called also the Oberwerk) is formed from his pipes today. His pipes also sound in the Quintadöhn 8', Gedact 4', Sexquialtera, and Mixtur of the Rückpositiv. Matthias Dropa expanded the compass of the instrument in 1698 and provided additional stops, especially in Pedal. His pipes still sound today in the RP Kromhorn 8', Octav 2', Pedal Gedact 8', Octav 4', Mixtur, Posaun 16', and Trometh 8'. A few decades later, the church was rebuilt and a west choir was added. Consequently,  Johann Hinrich Klapmeyer (1690-1757) was commissioned to relocate the organ into a newly constructed west gallery. The organ was substantially reworked as well between 1727-1730. The organ builder added new Pedal towers and supplied the Pedal Principal 8'.  He also inserted a new Brustwerk of 6 stops under the chest of the Oberwerk, and he added new reed stops to the Oberwerk:Trometh 8' and Vox humana 8'. Klapmeyer provided the organ with its present look. The organ survived until the present mostly unchanged. It was restored in 2004 by the Ahrend organ workshop.

The organ consists of three manuals and a pedal: altogether 2100 pipes and 35 sounding stops. The presence of 3 independent Principal 8 stops (in Oberwerk, Rückpositiv, and Pedal) is one remarkable feature of this instrument. It is a stylistically pure instrument and emblematic of the North German organ building school. The so called Hadeln liturgy adopted in 1567 anticipated the use of the organ as a solo instrument, thus contributing to the elevated art of the organ building and organ use in the Altenbruch church. The organ is especially suitable for early North German music, such as the work of H. Scheidemann, M. Weckmann, F. Tunder, and D. Buxtehude.

The SemiDry variant of the sample set is offered unencrypted, in plain wave format. It may be loaded in Hauptwerk 4.2 and higher (including HW5).

All ranks of all the divisions were recorded with and without tremulants for the most convincing tremulant behavior. The Rückpositiv stops were recorded with the Rückpositiv tremulant (faster) and also with the general tremulant (slower). Both recorded versions of the tremmed samples are included in the sample set. However, loading the authentic tremmed ranks consumes large amount of RAM. It is possible to select to use the artificial tremulant instead to save RAM (the switch is located on the mixer tab).

Polyphony of 4000 voices recommended for the full suround (2500 pipes minimum).

Polyphony of 1800 simultaneous pipes recommended for use of the wet or semiDry sample set.

The temperament is described as "Werckmeister III modifiziert". By measuring the real existing pitch of pipes at the time of the recording, we arrived at this cent deviation table: