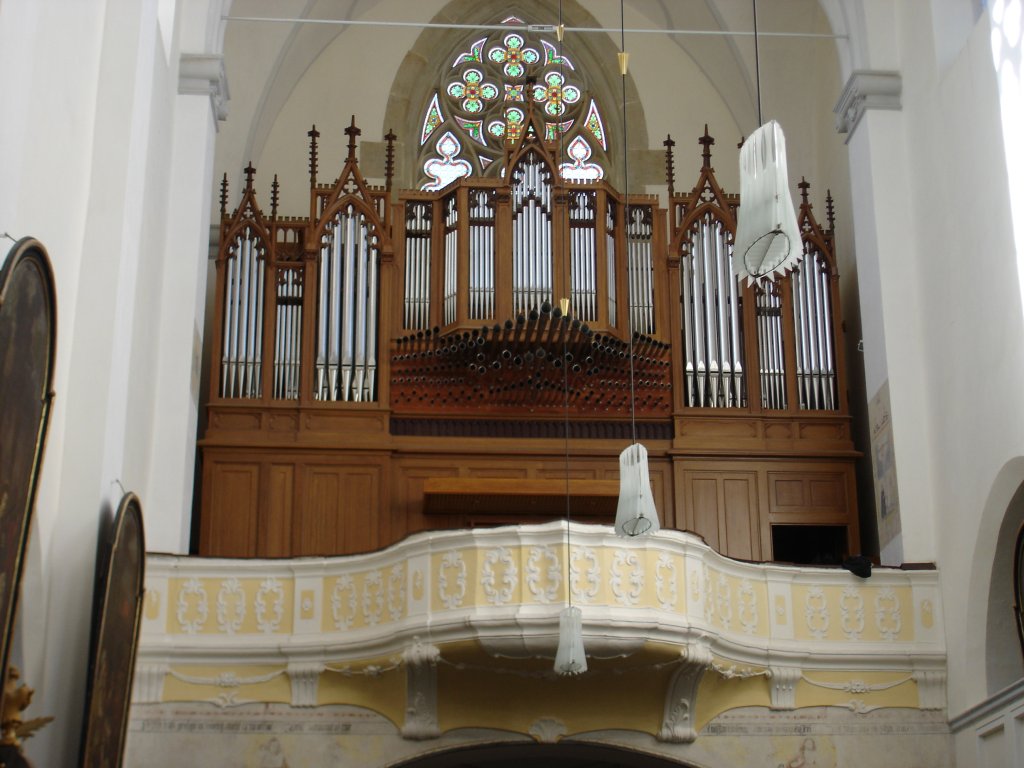 Litomysl is a lovely town in eastern Bohemia, practically at the border with Moravia. It is widely known as the birthplace of one of the most prominent Czech composers: Bedrich Smetana (1824-1884). Although he was celebrated as a pianist and a composer of opera as well as of orchestral music, he left some minor pieces for organ too (6 preludes, 1 fuge, 1 choral).

Further back in history, it is recognized for its renaissance castle where the original baroque theatre is preserved and still in function. The summer festival takes place there every year under the name "Smetanova Litomysl".

The Organ in the Church of the Holy Cross

Little is known about organs in the Church of the Holy Cross in those early times. There was a late baroque instrument by Frantisek Pavel Horak (1723-1822) built in 1780. It had two manuals and a pedal with alltogether 22 stops.

Later it was rebuilt completely in 1902 by Josef Kobrle (1851-1919). The old organ purely baroque in style seemed not to meet the fasion of the early XXth century. The Kobrle's instrument beared signs of "romantic" or symphonic organ which was desired at those times. It had also 2 manuals with 22 stops as the previous instrument but the brilliant aliquotes and high mixtures were replaced by lower sounding stops of many different colors: flutes, strings, reeds.

Hundred years later, the ways of evaluating the organ qualities have changed again. We now admire the brilliance of the baroque sound, we love the logic of the hierarchy of the WerkPrinzip but at the same time we do not want to loose the variety of romantic coloring stops. Hence, many organbuiders tend to favour large organs with great diversity of stops to satisfy the needs of all musical styles. Well, the purity of style is lost but the advantages of the "universal" organ seem to prevail.

Having this in mind, Vladimir Grygar (whose company is well known in many countries of the world for its craftsmenship) built completely new organ in the church of the Holy Cross. The work has been finished only in 2001. The new instrument has 4 manuals and 51 sounding stops (not counting couplers and other helpers).