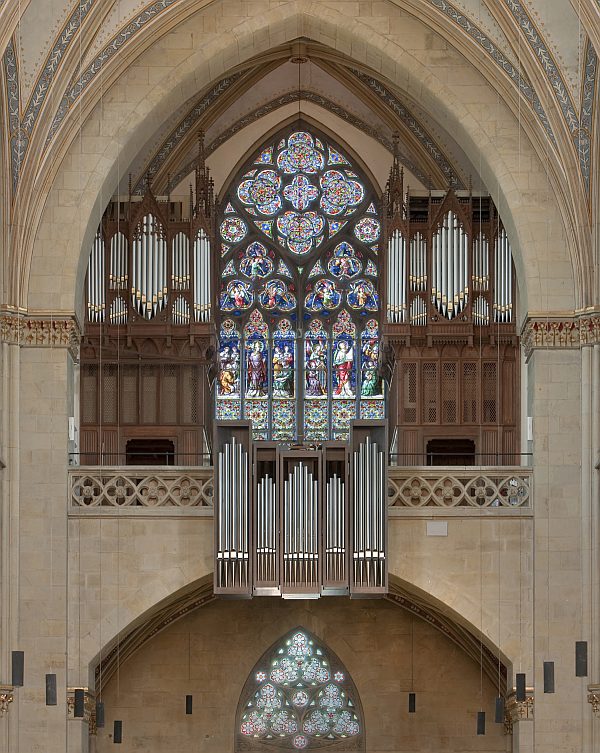 The neo-gothic cathedral of Billerbeck (Germany), dedicated to the honor of St. Ludger, was built in 1892–98. At that time, only a small organ was supplied because of the lack of funds. The organ had 32 stops and was built by Friedrich Fleiter from Münster. The historic organ case is still preserved today. In 1948, the organ was enlarged to 42 stops. The original two-manual organ console was re-used in the church of Aulendorf, where it remains today.

In 2001, an association of friends and supporters of the St. Ludger organ was founded and funds were raised for the construction of a new, large instrument. In 2008, Orgelbau Fleiter began to construct the organ, which was built in several stages and completed in 2014. Orgelbau Friedrich Fleiter was established in 1872 in Münster, and it has supplied numerous organs to churches of the Münster area for the past 150 years. Since 2007 the company is directed by Eberhard Hilse, who was the designer of the present Billerbeck organ. The instrument has 72 speaking stops distributed across four manuals and pedal.

The organ has been designed predominantly in the French symphonic style, although it incorporates elements from other traditions so that the result is an eclectic universal organ. It has five divisions: four manuals and pedal. The Hauptwerk and Chamadenwerk are located in the organ case on the right side (north side). The Schwellwerk is in the case on the left (south side). The Pedal sits at the back, behind both the historical cases and offers, among other stops, three 32' voices. The Rückpositiv on the balustrade of the organ gallery is enclosed in a swell box and contains 12 voices of mixed (French and German) traditions. The Hauptwerk and Schwellwerk voices were inspired by the French style of voicing developed by A. Cavaillé-Coll. The flutes of the Schwellwerk, including the mutations (aliquotes), are made of overblowing pipes. The Chamadenwerk offers solo stops in addition to the en chamade trumpets, namely the Vox Ludgeri, a clarinet-like reed, and the Flûte harmonique.

The samples are offered in 48kHz/24bit resolution. The multiple releases have three levels: short, mid and long. Hauptwerk v. 4.2 and higher supported (incl. HW5). The sample set is offered in a plain wave format, no encryption.

The reverb time up to 6.5 seconds.

Polyphony of 6000 voices recommended for the full suround (4000 pipes minimum).

The sample set is offered in a Surround variant (6 channels). There are four front channels and two rear channels. The front and rear audio channels can be mixed or used separately - depending on the preferences of the user. A dedicated "mixing desk" is available in Hauptwerk to mix the sound to the desired level. In addition to that, there are 2 semi-dry channels. These may be used stand-alone, or may be added to the 6 surround channels as additional (very) direct channels, forming an 8 channel sample set. Any mix of channels is possible depending on the personal user preferences. However, it probably makes little sense to combine the semi-dry and the direct channels. Rather, the semi-dry channels could be used instead of the direct channels for even higher portion of the direct sound in the mix.

Note: Vox Ludgeri is affected by the tremulant of Schwellwerk.

Carillon accessible from all manuals and the pedal. The original instrument has one carillon shared on all manuals. For the sample set, the carillon of the Schwellwerk is virtually separate, enclosed in the swell box and milder in voicing than the virtual carillon shared by the other divisions.

Rückpositiv and Schwellwerk are both enclosed. Vox Ludgeri on the original instrument shares the Schwellwerk enclosure. For the sample set, a new swellbox for the Chamadenwerk was constructed, driven by an independent virtual swell pedal. Since the horizontal trumpets are inside the organ case in Billerbeck (not displayed), it may be a unique opportunity to enclose them into a swell box, at least virtually. All the sudden, the division is not simply a loud Chamadenwerk, but also an Echo, if desired.