The history of the organ of the Martini Church in Groningen 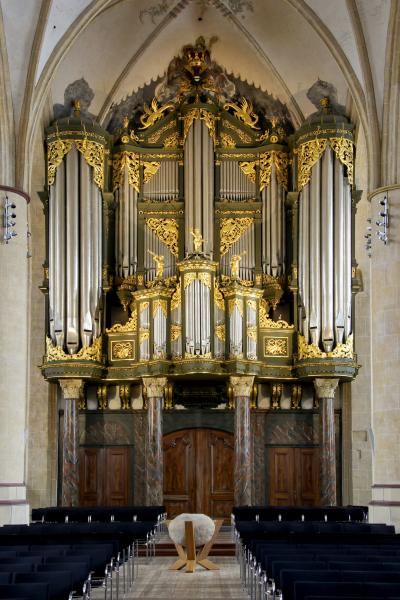 The history of the Martini organ dates back to 1450, when Master Hermannus built an organ and placed it in a new gallery. In 1482, the organ was extended with a Rugpositief by Master Johan then Damme from Appingedam. The consultant for that work was the humanist and organist Rudolphus Agricola. His name can be seen on the cartouche below the Rugpositief.

The organ case shows the year 1542, which refers to a rebuild of the organ in Renaissance style by an unknown builder. At that same time, the organ was expanded with a Bovenwerk. However, the Gothic framework for the organ case was almost completely preserved. Further additions were made around 1564 by Andreas de Mare and in 1627/28 by Anthoni and Adam Verbeeck. From 1685 to 1690 Jan Helman began extensive work including new bellows, keyboards and spring chests for the Hoofdwerk and the Pedaal, but he died in 1690 leaving some of the work unfinished. The parish then contacted Arp Schnitger, who completed the work left unfinished by Helman in 1691/92. Schnitger built large pedal towers on both sides of the organ and placed the 32-foot Principal pipes in the facade. The large pipes were made in the church, using ships' masts to help form them. The alloy for the front pipes has a high lead content. Schnitger also built three reed stops and a new wind chest for the Bovenwerk. Finally, he lowered the organ's pitch by moving all the pipes one step. By all these actions the organ received the signature of Arp Schnitger.

In 1728, Arp Schnitger's son Franz Caspar built new wind chests for the Hoofdwerk and the Pedaal, as well as a new Rugpositief including case, wood carvings, and console. Despite the long and diverse history of this organ before Schnitger's time, Schnitger's work is so profound that it is justifiable to say the organ of the Martini church is a Schnitger organ.

In the 19th century, the Martini organ was adapted several times to the tastes fashionable at the time, and its disposition was romanticized (1816, 1831, 1854/55). The organ builders Lohman and later Van Oeckelen made modifications to many stops and extended the organ to 52 stops.The 20th century brought several big changes: a pneumatic action for the pedal (1904), the removal of the eight surviving wedge bellows in favor of a large magazine bellows, and in 1938/39 a new console with electric action for the keyboards, some new registers, and a new tuning. However, the original console was kept in place.

By the second half of the 20th century, organologists and organ builders understood that traditional organ building had to be re-discovered. Pioneering work was done by the organologist Cornelis H. Edskes in Groningen. He studied the well-preserved organs of the Baroque era, which still retained their original state. The organ of the Martini church was romantically voiced, but through restoration the organ could be returned to the Baroque sound of Schnitger. The organ builder who had great experience with such restorations was Jürgen Ahrend. Together, Ahrend and Edskes laid plans for how to perform the restoration.

The restoration of the organ by Jürgen Ahrend in Leer/Loga (Germany) happened in two parts, the first in 1976/77 and the second in 1983/84. The work included reconstruction of the mechanical action, the construction of a new wind supply, and the restoration of the wind chests. The old pipes were restored to their baroque voicing and the organ was returned to the disposition of 1740 – although some 19th-century stops are also preserved in the current instrument with an adapted voicing. Ahrend even reconstructed the original Speelfluit 4´, of which only a single pipe from 1542 was found preserved in the local museum. The organ now consists of 53 speaking stops. It is remarkable that the 32-foot pipes of the organ were repaired again in the church, and again ships' masts were used to shape the metal.

The reverb time is ca. 6 seconds.

All ranks were recorded with and without tremulants where available for the most convincing tremulant behavior. The Rugwerk is affected by two tremulants, both of which were recorded. However, loading the sampled tremulant ranks consumes large amount of RAM. It is possible to use artificial (waveform) tremulant instead to save RAM (the switch is located on the mixer tab). You can choose to omit some or all of the sampled tremulant ranks when you load the organ the first time.

The sample set has several variants. The Semi-dry variant has been recorded very close to the pipes. It contains low level of the inherent reverberation. Hence, it is useful for loading with releases truncated to minimum, and impulse response reverb is used to place the organ virtually into any desired space. The samples for the semi-dry sample set are entirely different from the samples used in the surround variant!

RAM consumption: releases truncated to the shortest level (short decay) - for use with the Hauptwerk convolution engine and Sonus Paradisi IRs.

Front diffuse channels - captured at mid distance from the organ, where the sound had an excellent balance of direct and reverberated sound. These channels can be used alone for simple stereo applications, or as front channels for surround.

The Wet variant of the model includes only the Front distant channels.

The 4-Channel Surround variant of the model includes the Front Diffuse and Rear channels.

The Full Surround variant includes all 8 channels listed above.

In total, there are six front channels and two rear channels available. In the Full Surround variant, the front and rear audio channels can be mixed or used separately in myriad ways, depending on the preferences of  the user. A dedicated "mixing desk" is available in Hauptwerk to mix the sound  to the desired level of "wetness". Note: To reproduce the surround format, an audio card with at least 4 output channels is required, dedicating front channels  (in any desired blend) for the front speakers, and other  two channels for the rear speakers.

The sample set is not mono compatible, loading ranks in mono is not recommended.

How to set the optimal sound of the 8-channel surround?

The answer will depend on the taste of every user. Following lines are a simple guide for those who feel lost among so many channels. Start with the Distant solo. On the Mixer tab, slide all sliders to 0, except the Distant slider, leave it at the default settings. Listen to the result. If you like it, you are done with your optimal setup!

If you would like to hear more room resonance, add some rear sound to the mix. Slide the Rear slider a bit up until you like the result. Let the Distant channels play from your front speakers, while the Rear channels from your rear speakers.

If you feel, that the distant sound is too "wet" for you, and you wish to have some more detail of the organ pipe speech, you have two options. Mix some direct sound to your Distant channels by dragging the Direct slider a little bit up, until you get the detail you wish.The Direct channels should play from your front speakers as your Distant channels.

If you require still more direct pipe speech detail, you can mix the Direct channels to your Diffuse channels.

Following scheme shows the recording positions for the samples of the 8-channel surround variant. 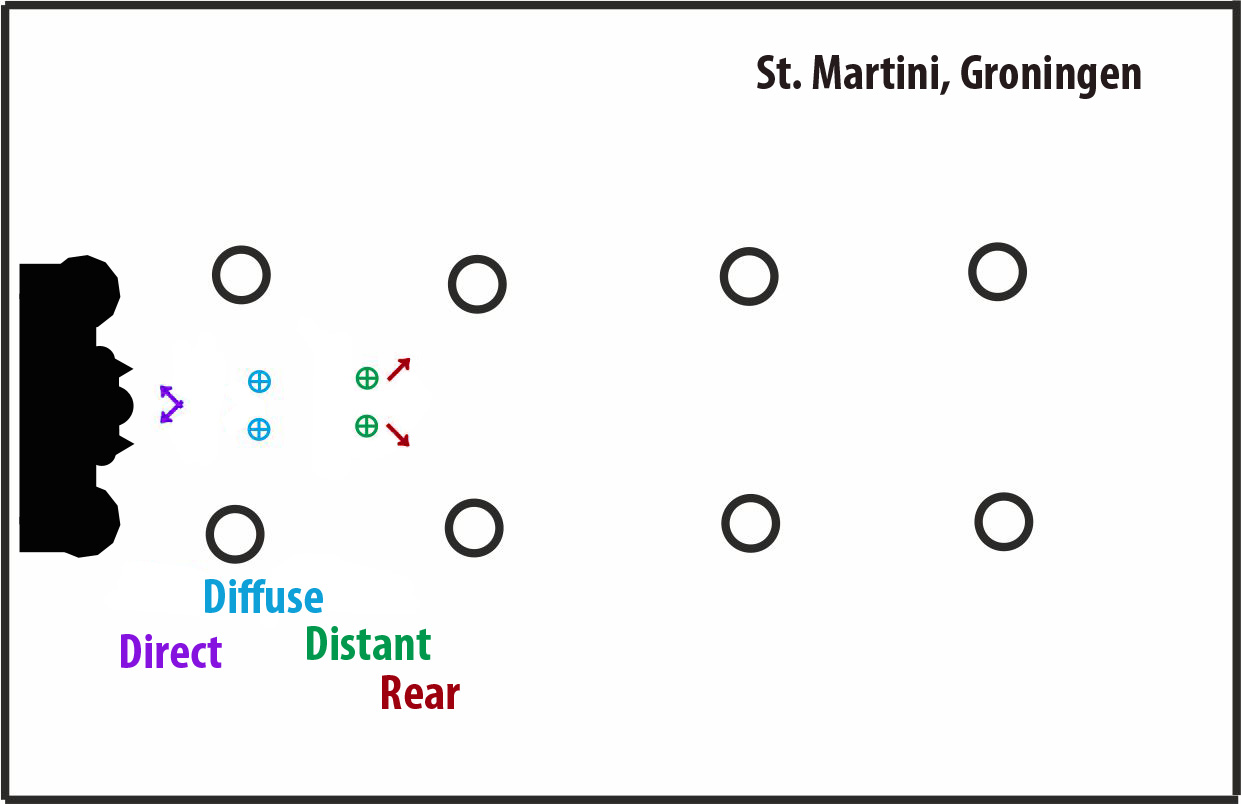 Semi-Dry variant. The update corrects pitch of some samples of RW Gedacktquint, and improves the wav headers of the noise samples. The mixer sliders now accept also MIDI output settings.