From Samples To Model 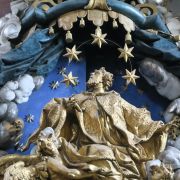 Once the original organ has been sampled, the model must be constructed. This involves removing unwanted noise from the samples, and organizing the samples into the stops and divisions as found on the original instrument. But, making the model is much more than that. These models are very sophisticated, taking advantage of today’s plentiful computing power to create remarkably realistic effects that mimic those of the actual organ. Here are some of the important steps in model-making:

Since the models must be capable of playing notes of arbitrary duration, loop points within each sample must be established. Multiple loops are created, and then used in random order during playback to prevent the ear from detecting any patterns. This effect is enhanced by the use of more than one long base sample per note when needed, to accurately represent the natural variation found in some pipes, especially on older organs. Good looping balances the realism of playback with reasonable RAM consumption, which is especially important in 6-channel models and on models with sampled tremulants.

Extraneous noise and hiss are the biggest problems when recording an organ. This noise comes from wind leakage in old chests and windways, loud blowers, noisy key actions, and even from sources outside the church. The goal when creating the samples and the resulting model is to preserve the original sound as much as possible, while also removing extrinsic noise. Since each note of each stop is a separate sample, when playing the model there can be hundreds of samples sounding concurrently. Any latent noise, such as blower noise or microphone hiss, would appear in every sample, and the additive layering effect of these noises would be horrendous. Therefore, the denoising work is very important to the overall result.

Over the years, Sonus Paradisi has developed a proprietary sample denoising technique. This multi-step process results in virtually noiseless sound, so that the models have a pristine, clean sound, while still preserving the quality and character of the original samples. As a result, you will not be disturbed by noise or hiss when playing the sample set, but you also will not get the impression that the sound of the virtual organ is dull or destroyed by denoising that is too aggressive.

The recorded releases for each sample must be aligned to the main loop to fit its phase, so that the transition between the attack and the release is smooth and realistic. The model must also be programmed with release timings in order to properly select the correct release to play given any main note duration.

A sophisticated model of the organ’s wind system is created as part of the virtual model, enabling the model to mimic in real-time the effects of changing wind pressure as notes are played and released. While modern engineering can create very stable wind for organs, it is common, especially historic organs, to have at least some flexibility in winding. This means that pressure in the chests varies based on the demands of the pipes that are playing at any given time. Changes in pressure create changes in pitch, amplitude, and harmonics, especially among smaller (higher-pitched) pipes. These effects can be simulated in the virtual organ through wind modeling.

Most advanced Sonus Paradisi models offer the Pipe Coupling feature. The pipes start to sound a bit out of tune, but they quickly try to come together to be almost in tune. This happens on many organs to some extent. The main effect is that it brings more movement to the sound similar to a dynamically applied chorus effect. Every organ in the world is somewhat mistuned (even 2 hours hafter the organbuilder finished its fresh tuning), therefore little amount of variable mistunings here and there adds realism to the digital model. Nevertheless, there are different users, and some want to hear the sound clean, transparent and in tune completely. Therefore, the Pipe Coupling feature is user controllable: visit the Mixer tab and see the slider for the Pipe Coupling. In the min. position, the Pipe Coupling effect is off and the organ best in tune.

On organs with one or more divisions enclosed behind swell shades, the model must be programmed to recreate the changing amplitude and harmonic attenuation to the samples as the shades are opened or closed. Recordings of various stops of the actual organ are made with the shades in different positions, and this information is used to create and calibrate the model of each swell enclosure.

The models also capture the character and features of the organ consoles, including original stop layouts and names, and any expression pedals or specialized controls such as a crescendo pedal or the ventils found on French romantic organs. Each organ is unique, and there is much greater difference among organs than in any other instrument, so the models reflect this. However, in newer models, simplified interfaces are also provided for people who do not want to take the time to learn about the intricacies and variations of each instrument.

Many models of historic organs include both an original and extended version. The original models stay true to the existing organs, but the extended models contain extensions, such as larger manual compass, to make more music playable. One common extension is to add notes at the top of the keyboard, since many older organs lack notes that are commonly found in music today. Another common extension is to expand short-octave bass into full chromatic bass. This is a modification that is often impossible on the original organs due to space limitations within the organ case, as there is not room for more large bass pipes. “New” notes are taken from existing samples, which are re-pitched and revoiced. Either the original or extended model can be chosen by the player as his or her preference, and the music at hand, dictates.

The models can include between two and six channels of samples, which correspond to one, two, or three stereo pairs from microphones in various recording locations in the room.

Older models are available in 2-channel format. The microphone position is chosen for a pleasant, useful balance of direct sound and room acoustics using a single stereo pair.

More recent models are available in 4-channel format. In 4-channel models, there are two “rear” channels to go with the usual channels as found in 2-channel models. This permits use of the model in a 4-channel surround sound system, enhancing the feel of being in the room. But it is not necessary to load all four channels; loading only the front channels makes the model the equivalent of the older 2-channel style, and this may be useful when using headphones or when the computer’s RAM is not large enough for all four channels.

In the 6-channel models, there are two controls to adjust the audio balance. First, there is a slider to adjust the balance of direct versus diffuse sound to any balance between 100% direct (when the slider is at position 1) and 100% diffuse (when the slider is at position 127). The default is 50% each, or position 64. Second, there is another slider to adjust the volume of the rear samples from off to full. Again, the default is halfway, or position 64. These balances may be changed any time the player wishes, and the models even contain presets to store and recall several different balance settings quickly and easily.

8-channel models allow to control each audio perspecive separately by a dedicated mixing slider. Any blend of the perspectives is possible as desired by the user.

As was the case for 4-channel models, there is no requirement to load all the available samples in a 6- or 8-channel model! The user may decide which channels are best for the situation based on many factors, including how much RAM is available in the computer, how many audio channels and speakers the system has, and individual preference for a direct versus more distant sound.

When loading only two channels, the diffuse samples in a 6-channel set are generally a good balance of clear organ sound and room acoustic, but some users may prefer the “closer” sound of the direct channels to feel as if they are at the console.

When loading four channels, there are two choices: Load direct and diffuse, or load one of those pairs along with the rear samples. This choice depends on the sound desired; loading direct and diffuse will give a “closer” sound, where using either of those pairs with rear samples will include a wetter, more distant sound. Of course, the balances between the samples can be adjusted using the sliders, so there are many effects possible.

When a computer does not have enough RAM to load an entire model, there are a few strategies to consider:

Reduce the bit rate: The model can be loaded at a lower bit rate, and using lossless compression. But, do not go below 20-bit format for the cleanest sound. Sonus Paradisi’s research shows there are noise artifacts introduced at 16-bit depth that may be unsatisfying.

Use modeled tremulants: Loading tremulant samples can greatly increase total RAM requirements, especially for organs where many stops are given tremulants by the builder. Some or all of these samples can be skipped when loading, relying instead on the low-frequency-oscillator model applied to the normal samples.

Omit channels: It is possible on a 4- or 6- or 8-channel model to use fewer channels, as described above.

By combining these and other strategies, you can make the best compromise when your PC does not have enough RAM.