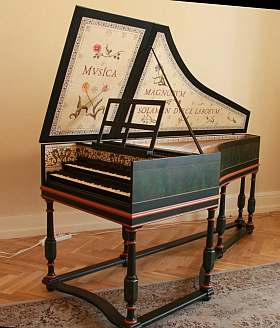 Two manual cembalo was built after the 1624 Johannes Ruckers model, which is kept in Musée Unterlinden (formerly belonged to the family de Sade and was kept at the Chateau de Conde, Condé-en-Brie).

The Flemish cembalo is solid in construction, colorful in tone with a rich resonance. The Flemish makers were apparently the first to build two-manual harpsichords after 1600.

The workshop of Ruckers is credited to build probably the most perfect harpsichords ever and it sets the benchmark for harpsichordists and harpsichord makers even today.

The replica used to record the sample set is found at the Prague Academy of Music. It was manufactured by František Vyhnálek in 2008. The proliferous Czech harpsichord maker has made more than 150 instrument in the past 25 years. He builds after French, Flemish, Italian and German models. Except cembalos, he builds also virginals and spinets. The instruments of František Vyhnálek sound in many countries of Europe, in U.S.A., in Japan and are used by top harpsichordists (Zuzana Ruzickova, Gustav Leonhardt, Ton Koopman, Jacques Ogg, Johann Sonnleitner etc.)

The specification of the instrument:

The harpsichord model is available in two variants: